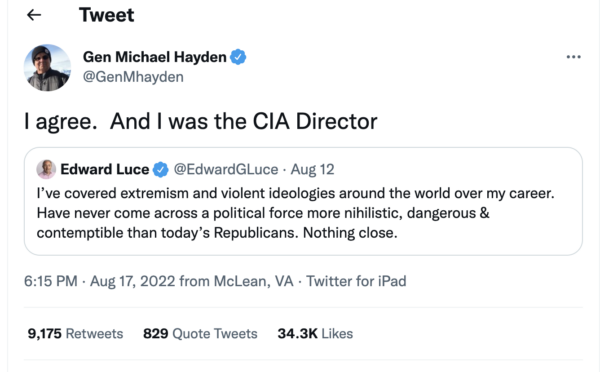 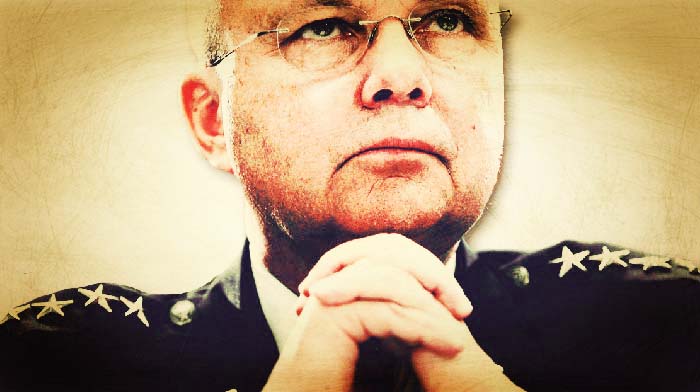 Sometimes you look at these “experts” and “officials” who used to hold these really high-ranking positions and you think, “My God, we allowed that certifiable nutjob to do THAT??” That’s what Trump’s Derangement Syndrome has done — it’s shown us who the crazies are. These people who always seemed so professional, and who were keeping their “crazy” under wraps, are now so incredibly whacked out over President Trump that they’re letting it all just “hang out.”

One of those people is former CIA Director and Military General Michael Hayden. The man is certifiable. I don’t even know how he passed the exam to get into the military, to be honest, and I can’t imagine what George W. Bush was thinking when he nominated him to run the CIA. But here we are now, and Mr. Hayden is retired, but still very much part of the DC apparatus. He spends his time working with his fellow intel buddies and losing his marbles on Twitter.

Today, he agreed with some crazy reporter for The Financial Times, that half the country, all Republicans, are more dangerous and contemptible than any extremist group in the world, and it’s not even close.

Mr. Edward Luce, the editor at The Financial Times thinks you and me — law-abiding/tax-paying Americans — are more dangerous and contemptible than ISIS terrorists who murder women and children. This is the level of insanity we’re dealing with right now in the elitist Democrat Party.

Here’s what Luce said: “I’ve covered extremism and violent ideologies around the world over my career. Have never come across a political force more nihilistic, dangerous & contemptible than today’s Republicans. Nothing close.”

And here was Hayden’s response: “I agree. And I was the CIA Director”

I agree. And I was the CIA Director https://t.co/LRAHDDyy4n

Here’s a screenshot in case he deletes it:

The irresponsibility in statements like these is off the charts. It’s a dog whistle for more unstable and emotionally crazy liberals to attack anyone who votes Republican. And to come from a CIA agent? Can you imagine if this man was still in charge? And what’s to say the people who are in charge don’t think exactly like this? Like irrational mental patients?

Is this how they all think about us? Did Hayden just say the quiet part out loud?

Here’s what people had to say to Michael:

“Coming from a megalomaniac psychopath I’d say these extremely well armed peaceful people should take a bow. #CIA are #Terrorist“

“Given that your agency conducted targeted lethal drone strikes against what you say are less contemptible and dangerous extremist groups overseas, what’s your recommendation for this more domestic problem?”

“Just in case you still take the CIA seriously.”

“If you think the people currently in charge don’t want you dead, please read this”

“The guy who reportedly brought you warrantless wiretapping and torture is worried people he doesn’t like are a threat to liberty.”

“As CIA Director, Michael Hayden lobbied Bush to let the CIA drone strike based purely on if ground vehicles’ behavior patterns were similar to Al-Qaeda’s—no proof of terrorist activity required. Hayden also thinks Republicans are more dangerous than Al-Qaeda. You do the math.”

“Former CIA director saying that republicans are basically extremist terrorists. These people hate you. We must utterly destroy the bureaucracy. There needs to be mass firings in the federal government and many of our executive agencies must be abolished”

“A CIA Director who lied under oath. Old “Enhanced Interrogation Techniques” himself. You’ve always been an opportunistic snake, but now you’re ready to delcare war on your own countrymen in the hope of five more minutes of relevance before you wither into the dustbin of history.”

“The Taliban. The Iranian Ayatollahs. The North Koreans. Global crime syndicates. None of them are even close to as evil as Trump voters. Ok.”

“Nothing to see here: merely a senior Deep State figure denouncing half the country he lives in as worse than ISIS or the Khmer Rouge. Stage 6, I believe?”

“The logic that drives each turn of our revolutionary spiral is Progressive Americans’ inherently insatiable desire to exercise their superiority over those they deem inferior.””

“Former CIA director believes Republicans are more dangerous than Isis and Al Qaeda and the media wonders why ppl think the government agencies are secretly working against them.”

“Abolish the FBI, CIA, and NSA in their entirety. There is no other pro-America, patriotic option other than to abolish them all and start over from scratch.”

“You are what the tree of liberty thirsts for”

“There are tens of thousands of these soulless, ghoulish puppets populating the corridors of power.”

There is no reason for the average American to trust anyone in the current government, when we have “highly respected” stalwarts from the old guard, saying sickening things like this.