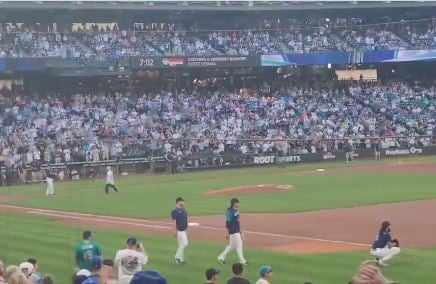 Psychopath and serial liar Dr. Tony Fauci was booed loudly at the Mariners vs Yankees game on Tuesday where he was asked to throw out the first pitch.

You can hear fans scream, “Loser!” as Fauci approaches the pitching mound.

Fauci booed as he walks out to give first pitch at Seattle Mariners gamepic.twitter.com/2QjDimPQbH

At least he has worked on his pitching since last time pic.twitter.com/9QqX8YUGwy

The man is very dangerous and shows no remorse for his actions.

Dr. Anthony Fauci was booed by baseball fans on Tuesday as he threw out the first pitch in the Seattle Mariners game against the New York Yankees.

Fauci has seen a massive dip in his popularity since his meteoric rise to becoming a household name during the beginning of the pandemic, as over half of independent voters want him gone.

‘58.9 percent of independent voters believe Dr. Fauci should resign his position and role in leading the government’s COVID-19 response to allow for new leadership,’ a poll by Convention of States Action showed earlier this year.

Those voters will likely get their wish — Fauci said in July he would be leaving his post by the end of President Joe Biden’s first term.