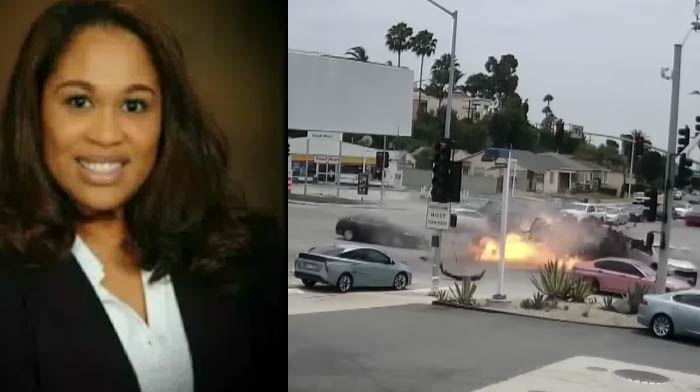 I saw this story about the horrific car accident in LA yesterday, and I couldn’t even bring myself to report on it. I watched the video, and it’s just baffling to me how this woman could have run a red light like that. It’s just so heart-wrenching. Six people are dead, including a little 11-month baby, and his pregnant mom. Eight other people, including six kids, were taken to the hospital with injuries. I pray to God they recover. There are so many unanswered questions surrounding this crash, but one has just been answered. Now, we know who the driver is, and the likely reason the accident happened. So now it’s time to bring you the story.

First, this is the video of the crash. You’ll see the woman’s Mercedes come FLYING down the street like a bat out of hell and just plow straight into on-coming traffic. The moment of impact is so intense, that the cars just burst into flames.

The driver survived. After you watch this clip, I will tell you more about her.

The woman responsible for this deadly disaster has been charged with vehicular manslaughter… Now, I don’t know if those charges will change as more details become available, but that’s where we stand right now, just from her running the red light.

But there’s more to this story, at least that’s what her friend claims. She spoke to the reporters at KTLA.

KTLA reported that witnesses looked on with horror after a crash in the Windsor Hills Thursday that was caused by a speeding driver who ran through a red light.

“It’s just like a bomb. A child was in the street…had got ejected. A pregnant mother was lying over to the side,” Alphonso Word told KTLA.

Investigators believe the driver of a Mercedes was traveling at more than 100 miles per hour in a 35 mph zone when she plowed into cars at the intersection of South La Brea and Slauson avenues around 1:40 p.m., killing six people and injuring eight others.

Several people were ejected from vehicles as a result of the crash, and two vehicles were engulfed in flames, according to the California Highway Patrol.

Among those killed: 23-year-old Asherey Ryan, of Los Angeles, her unborn child, and her infant.

CHP officials said the driver, who survived the crash, was arrested. Her name is Nicole Lorraine Linton, and she’s a registered nurse originally from Texas.

Six children and two adults were among those hospitalized after the crash.

Linton had to be extricated from her vehicle.

Police have not confirmed whether alcohol or drugs were factors in the crash, but a friend of the suspect told KTLA she may have been impaired following a fight with her boyfriend.

“She was drinking and she was not aware it was a red light because she shot straight through,” the woman said.

Now, I don’t know if this is true. Obviously, the authorities must properly investigate these claims and test the woman’s blood, which I am sure they’re doing as we speak. But, if they are true, and trust me, the internet is already running with this story like crazy, there could be additional charges, and some speculate, even first-degree murder charges if she was trying to commit suicide over the trouble with her boyfriend.

We’ll have to see where this leads and if these claims from the so-called “friend” that KTLA reported on are even accurate.

But as it stands now, the deaths and injuries are what we should be focused on, and go ahead and send these grieving and worried families all the prayers we can muster.

This is just such a horrific situation.