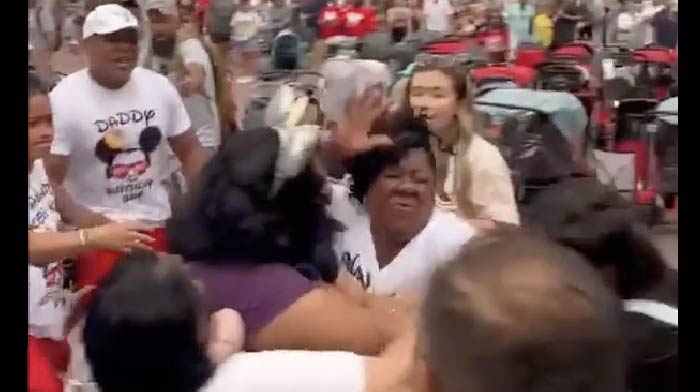 Chaos and violence broke out at Disney World in Florida.

The drama involved two families who were in line at Disney World, and it escalated into an all-out brawl

The violence happened in Fantasyland, of all places, where the two families punched each other and shouted profanity as park-goers screamed in the background.

The fight went on for several minutes before park officials and deputies broke it up.

“We came upon it, and it appeared as though it took about two minutes for two security personnel to arrive. Deputies arrived probably about five minutes after that,” an eyewitness told the local Fox station.

A female Disney guest was waiting to get into Mickey’s PhilharMagic and she realized she left her phone somewhere, so she left the line to go get it, while her family stayed in line.

When she returned, another family tried to block her from rejoining her family.

Her relatives reportedly waited outside the ride and confronted the other group when they came out.

We’ve been seeing a lot of this lately, people have such short fuses nowadays and their social graces are just shot.

I am not sure if it’s just the depression that’s choking the country right now thanks to Joe Biden, or the Dem’s tyrannical COVID lockdowns that changed everyone, but we need to get heathy as a society, or this entire country is doomed.