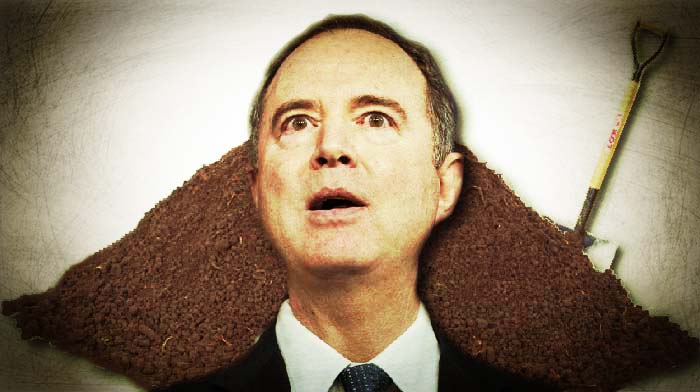 Panicking might be the best word to describe it… he knows the “Red Tsunami” is coming, and he’s the “janitor,” the mop-up man, trying to get everything as clean as possible for when the new guys take over.

And the first move he made was sneaking an amendment into the National Defense Authorization Act that would prohibit any evidence collected in violation of the Posse Comitatus Act from being used in investigations.

So, what does this mean, and why did he do it?

Well, for starters, he’s trying to cover up a little-known “secret mission” that was set into motion by then-acting attorney general Jeffrey Rosen, who had taken over for Bill Barr.

The weekend before Congress met to certify the sham 2020 election, Rosen created this team of elite government agents at Quantico, a magical place where the FBI and U.S. military co-exist.

While Rosen, was hurriedly rejecting all last-minute requests to investigate election fraud, he was also managing this top-secret very “hush-hush” operation that was happening right before the January 6th rally was set to take place.

This group was so elite, that it included commandos, who had a “shoot to kill” order.

Again, they were meeting just before January 6th — and at that time, it was nothing more than a political rally.

MORE NEWS: First Public Sign That Stress From Biden’s Cognitive Issues Are Getting to Obama

And beyond what I’ve talked about here, there’s not much else known about this very secret, clandestine “deadly” group that was assembled.

But here’s the problem for the bad guys…. it sounds like the military may have engaged in “civilian law enforcement activity,” and surveillance and intelligence collection leading up to January 6th, and if that happened it would be a flagrant violation of the military’s code of conduct and federal law… and the last thing they want is Republicans uncovering this.

And that’s where Adam Schiff comes in, ladies and gentlemen…

Schiff snuck that amendment into the National Defense Authorization Act that would prohibit any evidence collected in violation of the Posse Comitatus Act from being used in a number of proceedings, including criminal trials and congressional investigations.

They’re covering their tracks… they’re making it so they can’t be prosecuted for what they did, from the Russia Hoax to January 6th, and everything in between.

American Greatness is asking: what is Adam Schiff, on behalf of the Biden regime and Trump foes in the U.S. military, including Chairman of the Joint Chiefs of Staff Mark Milley, trying to hide?

It is not a coincidence that Schiff introduced the amendment just a few months before a predicted Republican landslide in November, which will give control of Congress back to the GOP. House Minority Leader and presumptive Speaker of the House Kevin McCarthy is planning to conduct multiple investigations into the Biden regime next year including of the deadly and distrasrous withdrawal from Afghanistan; the Daily Caller reported this week that Republican lawmakers are “flooding the Biden administration with ‘hundreds of preservation notices’ asking that relevant documents be preserved.”

But one can easily see how Schiff’s amendment could be used as legislative cover to prevent production of any materials from Biden’s Department of Defense. After all, according to a 2018 congressional analysis of Posse Comitatus, “compliance [of the act] is ordinarily the result of military self-restraint.” So, too, is enforcement: “The act is a criminal statute under which there has been but a handful of known prosecutions,” the same report explained.

This is the sort of vehicle that Democrats know how to use and exploit for political advantage. If interpretation and enforcement is totally arbitrary, who decides? Defense Secretary Lloyd Austin? The Justice Department? Biden’s White House lawyers?

Imagine how Democrats could conceal the use of military personnel related to the events of January 6. Congressional Republicans send a request to Austin seeking all records, documents, and communications pertaining to the military’s involvement before and during the Capitol protest. Austin replies that he has determined the military—under control of President Trump at the time, no less—violated Posse Comitatus and therefore the requested materials cannot be produced under authority of the Schiff amendment.

Republicans can howl and scream but they have no legal remedy. Austin won’t investigate and Attorney General Merrick Garland won’t prosecute.

This scenario could be repeated for every Republican inquiry into Biden’s Defense Department.

Does anyone really think this regime will hand over information to GOP investigators and committees without pulling every trick in the book, starting with Schiff’s amendment?

So, while Schiff is busy doing all of this hole-digging and burying, what he’s doing is leaving a perfect road map for the GOP to follow.

He basically draws them a map and shows them where all the scandals are.

Now, it would behoove the GOP to take that map and start digging around January 6th, and see what they can uncover.