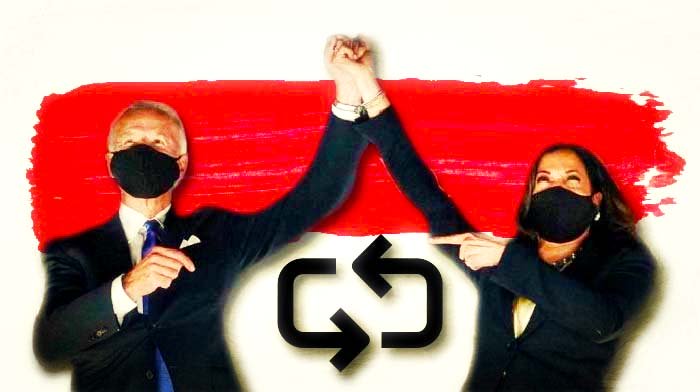 Remember back when Joe was first installed, and everyone talked about this plan that was in place, where Joe would work for a while, and then Kamala would step in and take over?

It was dubbed the “Swap.”

This was a common way of thinking by many people since Joe was so senile and frail (he was actually much sharper and stronger back then than he is now), that he would step down and Kamala would take over.

This was before we realized how buffoonish Kamala is. I mean, we all knew she was a ding-a-ling, but we didn’t know it would be THIS bad. It’s almost unbelievable…

Once it became clear that Kamala was dumber and less likable than a box of rocks, people started doubting there would be a “swap.”

Then, suddenly, the “swap” came back into style.

It happened because Joe Biden’s cognitive condition has gotten so much worse, and he looks so frail.

Recently, he fell off his bike, that wasn’t even moving, and then we all saw his “cue cards” that tell him things like:”YOU sit in YOUR seat”

So, the “swap” appeared to be back on. I mean, how on earth can Joe Biden keep doing his for 3 more months, let alone 3 years?

It only made sense that they’d make the switcheroo now, to avoid more disasters down the road.

But that will not happen. Not now, not later, not ever.

I would venture to say, barring some very serious medical issues, the “swap” is off, and will probably never happen.

A new poll was just released, and it’s packed full of bad news for Team Biden and Kamala.

First, most Americans believe Joe Biden is too far-gone mentally and too frail to be president.

Second, and this is the real kicker… they’d rather stick with the dementia-riddled weak guy over Kamala…

Breitbart reported that a majority of voters are worried about President Joe Biden’s mental and physical fitness, a poll released Thursday found.

The poll, conducted by Scott Rasmussen and RMG Research, asked the question, “How worried are you about the mental and physical fitness of President Joe Biden?”

The poll also asked, “Suppose that President Biden stepped down and Kamala Harris became president. Would that be better or worse for the United States?”

Wow. America does not like Kamala Harris, that’s for sure.

And they think Joe has mush for brains.

Joe’s number one problem isn’t his terrible policies, it’s him.

He can change policies or change his opinion on an issue – God knows he’s flip-flopped his entire career, but he can’t change his brain.

And that’s what REALLY scares Americans most, whether or not they admit it.