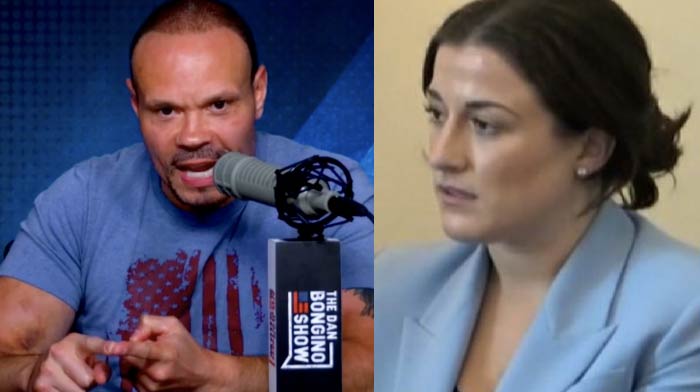 The Jan 6 sham committee held their “emergency” hearing yesterday, with their star witness, Cassidy Hutchinson — a low-level/coffee fetching staffer who worked as a secretary-type aide for Mark Meadows.

As you know, Dan was a Secret Service Agent for 12 years, who actually worked for the presidential transportation division. So, what Cassidy testified to, about Trump trying to commandeer “The Beast” by choking a secret service agent, is definitely in Dan’s wheelhouse.

But it was what he uncovered about Cassidy’s claim that Trump knew many of his supporters were armed with AR-15s and spears on January 6th, that caught my attention.

But that doesn’t matter. The fake news media is running with the story, anyway.

They have to, now that Cassidy’s “Beast Hijacking” fairytale has fallen apart.

According to Cassidy, she heard Trump say he didn’t “f**ing care” if his people were armed because they weren’t there to “kill him” and to let them in…

But did she actually hear President Trump say THAT?

This is what Dan Bongino is now asking after combing over her testimony because Dan discovered it sounds like Cassidy didn’t actually hear that — it sounds like she’s been heavily coached by a shrewd lawyer, to suggest that MAYBE TRUMP MIGHT HAVE SAID SOMETHING SORTA LIKE THAT, MAYBE… but not that she actually heard him say those words, or if she did, she can’t recall exactly. Bla bla bla.

And of course, that didn’t stop the left-wing fake news peddlers at Politico from running a story that claimed President Trump knew his supporters were armed and wanted them to go into the Capitol with their weapons…as a matter of fact, according to Politico, Trump wanted to get them ushered in as fast as possible.

That’s the “theme” and “vibe” of the Politico piece, while Cassidy’s statement about what she heard was tepid, shy, and unassuming…. exactly how a lawyer wants it.

Dan’s comments on the “armed Trump supporters” start at around the 7:05 mark, but I’d encourage you to watch the entire thing.

Dan gets into the motorcade story, as well.

So, my theory on this entire situation is that J6 wanted the media to have something juice and sensational to write about, in order to give their committee ratings and an interest boost.

Cassidy claimed she “maybe, mighta, sorta, coulda” overheard some stuff, and then said someone else told her other stuff, totally ambiguous, so she can’t get thrown in jail for perjury, but enough to give the fake news the soundbites and crumbs they need to put out a TON of fake/salacious stories.

That was the plan, and it worked for them.

But, I think this will all backfire.

Americans see what the left has been doing for 6 years now with all the Trump hysteria. This game move might have worked in 2017, maybe 2018, but not today.

There’s too much fake news water under the bridge in 2022 to successfully pull this off.

I say it’s gonna backfire all over them, and Biden, and all Dems, epically.