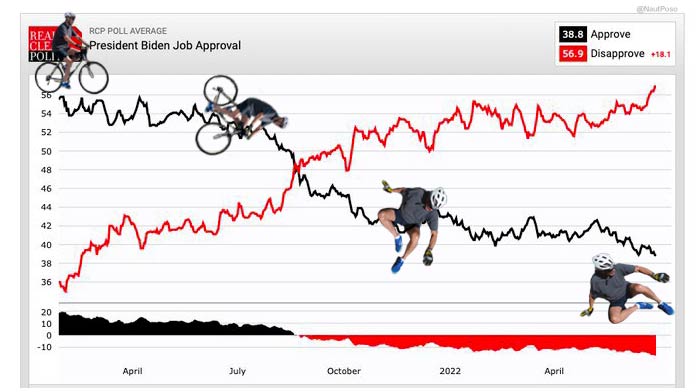 Well, another week, another round of bad polls for Joe Biden.

What else is new?

He’s bottomed out, yet again… this bumbling old coot has been in free-fall for months now.

And as I’ve said before, if he really won 81-million LEGAL votes, this wouldn’t be happening to him so quickly.

He would have had a massive safety net of A LOT of voters, who would have held him in place for a decent amount of time before he really started sinking.

But that’s not what happened, is it?

MORE NEWS: We Know Who The Jan 6 “Surprise Witness” is, And Wait Until You See What Was Just Uncovered About Her

Biden went down like an anchor traveling at 800 miles per hour.

He may have gotten that many votes, but they sure as hell weren’t legal.

So, what’s going to happen now?

Will Joe just keep falling in the polls until he’s down to 10 percent support?

Quantus Polls put out a great tweet about what’s coming next for Joe.

The first way is he starts cutting into those hardcore supporters and losing them, which would be devastating for him, but I don’t see that happening, or if it does, it won’t be significant enough to drop him too much lower.

Biden bottoms out again at -18.1 differential. Total 95.7 (app + disap.). His disapp. keeps growing but appr. only changes modestly. This means undecideds are breaking against Biden. Next stop is either he eats into his core support or stabilizes about where we he is at. pic.twitter.com/tm8vIErM4D

So, basically, we’ll be looking at Joe Biden with about a 36-40-ish approval rating until the Dems figure out a way to get rid of him.

Even though, in reality, we all know it’s about 8-10 points lower.

But I can’t imagine they’ll wait too long after the midterms to start the major push to get rid of Joe.

See, Biden actually thinks he’s running in 2024 and wants to announce it after the November vote.

Ha ha, can you imagine?

My guess is that Joe will be gone pretty soon after the midterms. He’ll either resign over the issues with Hunter, or he’ll be successfully impeached and removed.

And it won’t be because the GOP is so amazing…

It’ll be because the Dems want this drooling fool outta here.

Note: article meme was made by the very talented meme artist Naut Poso. You can follow him here on Twitter