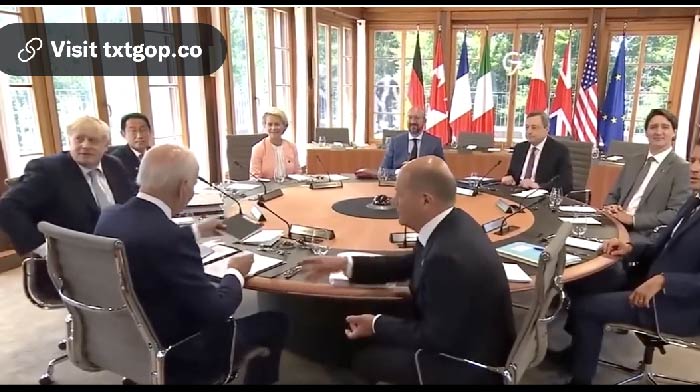 There are some people that don’t seem as old as their age.

This happens a lot. Some elderly people will be so quick-witted, or very agile, and they’ll seemingly defy their old age.

Look at President Trump, he’s like that in many ways. He’s always so mentally sharp, and funny, and nothing gets past him.

And then there’s Joe Biden.

Of course, that’s mainly because he’s got some very serious cognitive issues, but even his look is frail and he shuffles around like a man who’s in his 90s.

Joe just comes off as this lost old guy, who needs a team of nurses and doctors to keep him going.

And nowhere was that more apparent than at the G7 Summit in Austria, where once again, Joe Biden was caught in a very embarrassing situation.

Cameras caught a moment, where all the leaders at the table were instructed to face the camera for a photo.

The instructions were given right behind Joe, but he either didn’t hear them or didn’t understand them.

Joe just kept shuffling his little papers around and didn’t react to the request.

Meanwhile, everyone else is posing for the camera.

That’s when the German leader stepped in, like an official “Handler” and explained to Joe what he needed to do.

I was waiting for the German leader to hand Joe a “cue card,” for crying out loud.

“Joe? Will you just turn a bit?” pic.twitter.com/k0vw3yRHMC

“Pretty sure everyone is laughing at this idiot…”

They all know granddad is senile”

“Well, in all fairness, Joe probably just woke up from a nap”

“Look at the subtle reactions. You can tell they’re all thinking the same thing. Same thing you’re thinking. “This guy isn’t all there.” Embarrassing us on the world stage.”

“The Idiot and Thief” v“YOU turn around in YOUR chair” Joe needed his cue cards, didn’t he?”

“Completely out to lunch.”

“My God, this just keeps getting worse.”

Yes, it is getting worse.

We can all see it.

And the worse it gets, the tougher it is for the left and the media to ignore his raging senility.