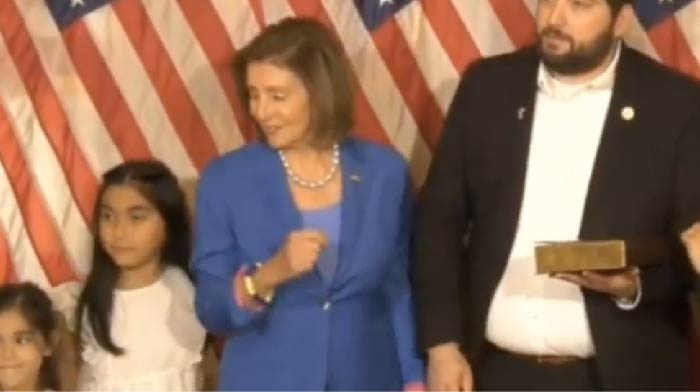 Do you want to see what a spiteful, nasty, vile human being Nancy Pelosi truly is?

It was the moment when a new GOP Rep was being sworn in after she won a special election in Texas and flipped a blue seat red. Mayra Flores had her two daughters with her at the historic event and Nancy Pelosi, who was overseeing the event, was caught on camera rudely shoving Mayra’s daughter.

Rep. Mayra Flores of Texas made the accusation after a video posted on social media showed her posing with Pelosi (D-Calif.) and her family at the ceremony — with conservative commentators saying the speaker “elbowed” Flores’ daughter.

“No child should be pushed to the side for a photo op. PERIOD!!” Flores captioned a retweet of the video.

“I am so proud of my strong, beautiful daughter for not allowing this to faze her,” she said. “She continued to smile and pose for the picture like a Queen.”

The video shows Pelosi, standing next to Flores’ daughter, as she waves over the family’s pastor. Pelosi then looks at the girl and extends her elbow at the same point that the child moves over.

James Woods shared the video and this is what he said: “I love this princess stood her ground, while Nancy showed her true colors.”

It’s true, that little girl was not going to be bullied by an old angry lady.

I love this princess stood her ground, while Nancy showed her true colors. pic.twitter.com/17ArfkD3MG

“Tell us again, Democrats…..who are the racists?”

“I see Bullying here!!! Really? What a great example to set for ALL to see.”

“Pelosi is like Joe. The dementia is so bad, she can’t control her emotions anymore”

“Pelosi is RUDE. She doesn’t deserve an iota of respect.”

“Seen: A fraction of the resentment that pro-aborts hold for minority kids.”

“At first take I gave Pelosi the benefit of doubt, maybe giving the lil girl a kinda ‘hey kid’ nudge, but um, no. POS”

Pay attention. They always show you who they are…

Now, will our media ask her or the Biden admin about this behavior?

I’d like to see someone show Pelosi the clip and have her explain herself to the American people.