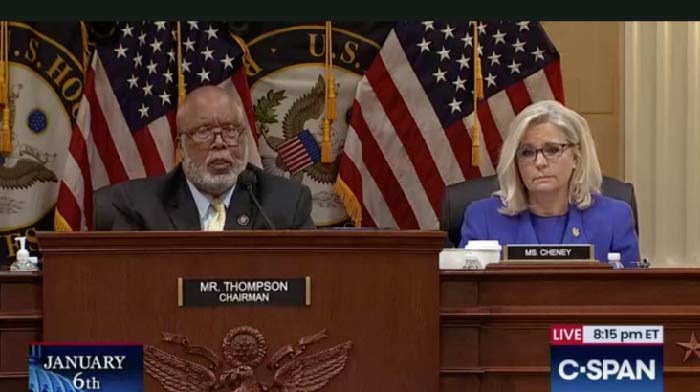 Until now, the J6 hoax artists in Congress have stuck together like glue.

Dems and RINOs, like Kinzinger and Cheney, have bonded over their Stage 5 TDS, and are working tirelessly to put on a pointless, costly show for the American people.

Thus far everyone’s been united in the cause to “destroy Trump” for the millionth time, but things are changing…

There’s been a crack in the armor, and boy, Liz Cheney is fuming mad over it.

The Hill reported that on Monday, June 13, the first crack appeared in the otherwise cohesive wall of the House Select Committee to Investigate the January 6 Attack on the U.S. Capitol. The fissure opened when committee Chairman Bennie G. Thompson (D-Miss.) told reporters after that day’s hearing that the committee would not be making any criminal referrals to the Justice Department of former President Donald J. Trump or anyone else.

Almost immediately, Vice Chair Liz Cheney (R-Wyo.) tweeted that the committee “has not issued a conclusion regarding potential criminal referrals,” and will do so “at an appropriate time.” Another committee member, Rep. Elaine Luria (D-Va.) issued her own conclusion that “if criminal activity occurred, it is our responsibility to report that activity to the DOJ.” Other committee members, taken aback by the chairman’s comments, were stumbling to respond, but most chose to keep their powder dry until the committee could talk it over privately.

Meantime, a committee spokesperson released a statement to CNN the following day which attempted to clarify the chairman’s comments — sort of a sideways walk-back: “The committee has no authority to prosecute individuals but is rather tasked with developing facts….”  Two sentences later, the spokesperson said the committee would gather “all relevant information, offer recommendations, and, if warranted, make criminal referrals.”

It is doubtful the chairman’s remarks on referrals were an inadvertent slip of the tongue.  There have certainly been private and even public surmises as to whether criminal referrals are advisable, perhaps even some guidance from above.  Ranking committee Democrat Zoe Lofgren (Calif.), who is close to Speaker Nancy Pelosi (D-Calif.), said publicly in March that a criminal referral would be “unproductive” because “it carries no legal weight.”

Of course, it carries no legal weight. None of this does, it’s just another costly, and time-consuming political stunt from the Dems to soothe their Stage 5 TDS, and Americans are sick of it.

My guess is that ratings and polling are starting to roll in, and Dems see they’re making matters worse with this J6 nonsense and are now looking for a way to slither out.

But Liz, being the sociopathic Karen that she is, can’t let it go.

Remember, this is the woman whose father shot his friend’s face off during a “fun” hunting trip… This woman’s got homicidal rage running through her veins, and nothing will stop her, except the American people at the voting booth.