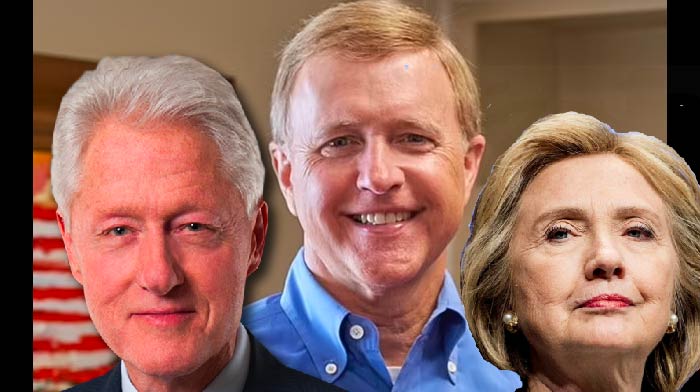 Well, looks like Bill, and Hillary just caught another break.

As things were really heating up in the mysterious “suicide” of yet another one of their close pals with Epstein ties, a judge stepped in and stopped the bleeding for them.

Little Rock businessman Mark Middleton, who introduced the late perv to the former president, was found May 7 hanging from a tree with a shotgun blast through his chest and a cheap Dollar Tree-type extension cord around his neck in what investigators have determined to be a suicide.

While some suspect Middleton joins a long list of Clinton associates who have met an untimely death, Perry County Circuit Judge Alice Gray determined the money-man’s family would suffer “embarrassment and harassment” and “irreparable injury” if the shocking police records and grisly photos were released to the media.

“The Court finds that since Mr. Middleton’s death, the Middleton have been harassed by individuals with outlandish, hurtful, unsubstantiated, and offensive conspiracy theories regarding Mr. Middleton, his death, and his family, which have caused the Middletons immense harm and anguish.”

The lawsuit was filed by Middleton’s wife, Rhea and brother Larry, on May 23 by attorney Paul Parnell, of the Rose Law Firm – the same legal eagles where Hillary Clinton worked before becoming First Lady, after a series of explosive RadarOnline.com stories raising question about the cause of death.

RadarOnline.com’s investigation was sparked by one of Middleton’s terrified business associates, who asked to remain anonymous for fear of dying, who came forward last month to demand an independent investigation, claiming the 59-year-old father of two was extremely close to Clinton and incapable of committing an elaborate suicide.

The hell-bent businessman even created makeshift gallows by lugging a table and trespassing onto a farm owned by Heifer International, whose headquarters is on the same parcel of land partially owned by Clinton Presidential Center in Little Rock.

‘He Was Murdered’: Bombshell Claims Surround ‘Makeshift Gallows’ Death Of Clintons’ Special Advisor Who Let Sicko Jeffrey Epstein Into White House
“Everyone that I know here, that has worked with Mark, knows it is physically impossible for Mark to have killed himself,” the source tells RadarOnline.com, noting that Middleton was an integral part of helping construct the Clinton Library.

Well, this isn’t really surprising is it?

I’m this judge obviously enjoys living and doesn’t want to get on the bad side of Hillary and Bill and end up like Mr. Middleton.