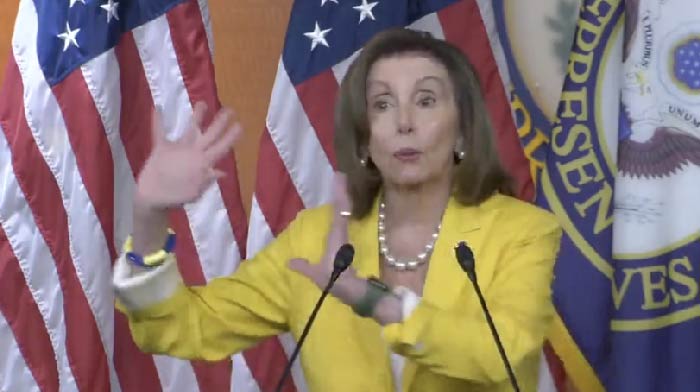 I saw a meme today, that you’ve got to see. On one side is a photo of Dianne Feinstein when she first arrived in DC and the other is a picture of what she looked like when she finally left.

Why are we allowing these senile, confused old coots to run our country and ruin our lives?

And it’s not just Joe Biden who is waffling in a confused tapioca-pudding haze.

MORE NEWS: Whoa! President Trump Just Shook Up The Entire J6 Committee Like Only HE Can… Now What, Liz?

Nancy Pelosi is right there with him… I don’t know what’s wrong with her — if it’s too much vodka, or she’s just so old and senile that she can’t think straight anymore, but today, during a moment talking with the press, Pelosi completely lost track of what year it was and announced that we’re still in Iraq, fighting.

Good Lord, woman, the U.S. declared an end to the war in Iraq on December 15, 2011, nearly ten years after the fighting began.

It’s now 2022… what the hell is Nancy Pelosi thinking?

I love what this guy, who goes by the handle “Rising Serpent” said in a tweet: “Gin soaked lampshade with enough Botox to kill an entire army has zero grasp on reality and thinks the US is still fighting a war in Iraq.”

Gin soaked lampshade with enough Botox to kill an entire army has zero grasp on reality and thinks the US is still fighting a war in Iraq.
pic.twitter.com/uyPZf0OTHP

She’s 3rd in line for the White House, behind an Alzheimer’s patient and a complete and total dolt.

But this is the country and the life that globalists want for you.. a bunch of feeble-minded elderly people with cognitive issues and drinking problems running the show, and mindlessly implementing the radical agenda of communists who are pulling their strings.

Don’t you think we deserve better than this?

Why are we allowing this to go on? I wouldn’t let Nancy or Joe housesit my plastic plants, yet they have all of this control over my country and my life?

It makes zero sense… we need to get these career politicians out of DC before they kill all of us.