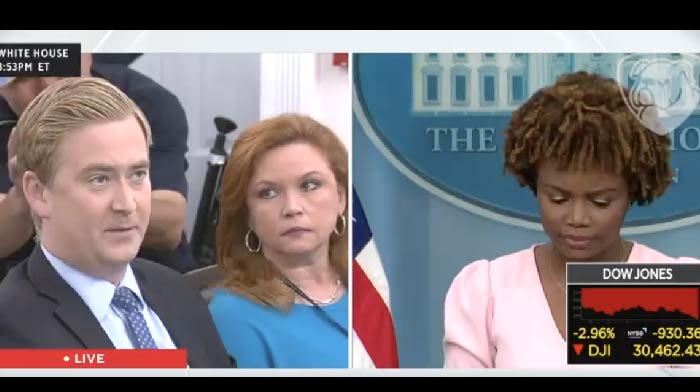 The smirk is subtle, of course — you’d expect nothing less from mild-mannered, very polite Peter Doocy, but if you look closely, it’s there…

Peter used to have to sharpen up his knives when he went against Jen Psaki… she was one of the fastest and best liars in the swamp. The woman was absolutely shameless when it came to spinning and lying and turning questions into pretzels, so twisted up that you didn’t even know what the hell was going on anymore.

But Karine Jean-Pierre is not Jen Psaki. As a matter of fact, she’s really terrible at her job.

So, when Peter Doocy walks into the press room now, his knife can be dull and he’ll still slice and dice things up with his questions… and KJP never sees it coming.

And today was no exception…

MORE NEWS: [VIDEO] Has Anyone Bothered To Tell Biden What “MAGA” Actually Stands For?

Doocy hit KJP with a doozy about Biden, who bragged incessantly about how great the stock market was doing under his “amazing leadership”

Rule #1 to all politicians… never use the stock market to take a victory lap, it’s too damn touchy.

But in this case, the market is taking a nose-dive because like KJP, Biden is also terrible at his job.

So, Peter wanted to know how Biden felt about it now that the market’s at the bottom of the swamp with Joe’s approval numbers…

And if you look closely, you can see that smirk on Peter’s face when he asks… he knows he got her with this one!

Doocy: “And that also led to historic inflation?”

She is just terrible at this.

“I almost miss Psaki…almost. At least with Jen, it was a fight, this is just a mess.”

“Know how you can tell a liar? They can’t look you in the eyes. She NEVER looks at anyone but her note book that she reads verbatim even if it makes no sense to the question. The worst administration in the history of America.”

“History will not be kind to this administration.”

“An easy and enjoyable layup for Pete”

“She is a professional bullshit artist with virtually no skills.”

“Doocy had fun with that one…”

“She really is awful at this job.”

“Has anyone trained this poor lady or did they just throw her to the wolves and expect her to be able to defend a madman with Dementia?”

Before we feel too sorry for Karine, don’t forget she’s a radical Russia hoax-pusher who is all-in on the destruction of America.

And we should thank God she stinks at her job, or we’d be in worse trouble.