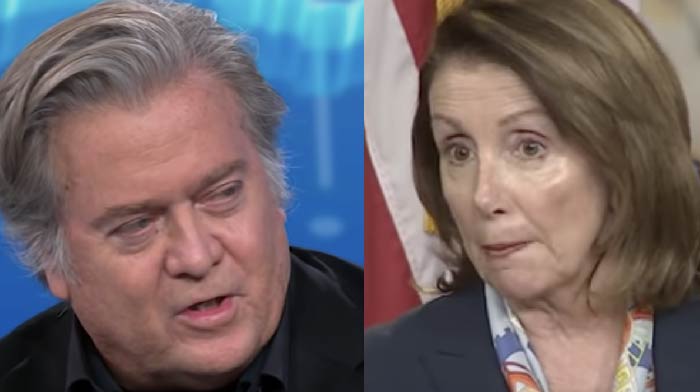 We all knew this was coming… Steve Bannon vowed he’d take down the Dems and the January 6th committee, and true to his word, that’s precisely what he’s doing.

Bannon has just dropped his nuke on the Dems and the sham J6 Committee, and it’s a doozy.

CNN is reporting that Steve Bannon, set to go to trial next month for defying a congressional subpoena, has subpoenaed House Speaker Nancy Pelosi and members of the House select committee investigating the January 6 insurrection as he builds his defense.

MORE NEWS: There’s Something Fishy Going On With Paul Pelosi And Randy Quaid’s Got a “Theory”

Bannon, a conservative firebrand who previously served as former President Donald Trump’s chief strategist and senior counselor, was charged with two counts of contempt of Congress in November 2021 after refusing to testify and produce documents. He has pleaded not guilty.

Last week, Bannon’s legal team subpoenaed 16 lawmakers and congressional staffers to testify at the July trial and produce documents, according to one of Bannon’s attorneys and copies of the subpoenas provided to CNN. The subpoenas were aimed at all nine members of the select committee, three committee staffers and General Counsel for the House of Representatives Douglas Letter.

A spokesman for the House committee declined to comment. Spokespeople for Pelosi, Hoyer and Clyburn did not immediately respond to requests to comment.

The great thing about this is that now, Bannon can get the answers that we haven’t been able to from Pelosi and the committee.

We want to know what Pelosi told the Capitol Police that day, and we’d also like to see those video tapes they’ve kept hidden.

And thanks to our shady government, this is the only way that we can do that… so, as Steve Bannon said, back when all of this went down, he would use the Dems attacks to his advantage, and that’s exactly what he’s doing.

Payback is a “you-know-what.”