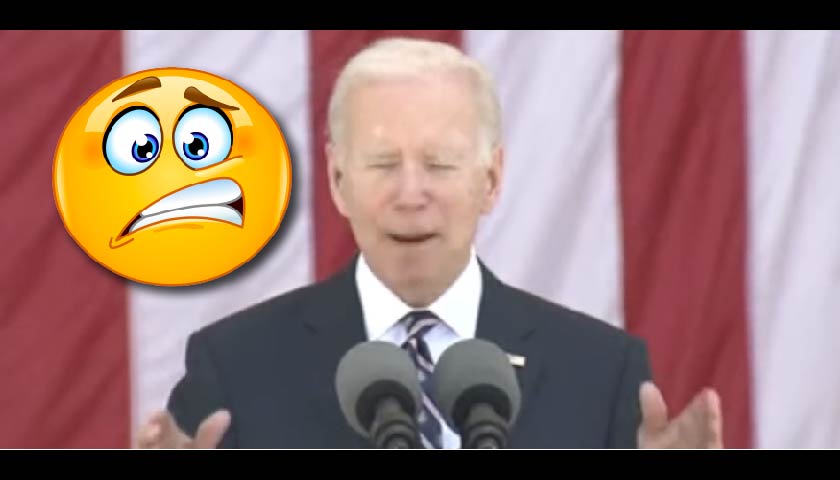 It feels like the lower Joe’s poll numbers go, the crazier he gets.

His Handlers don’t care what the American people think.

If they did, they’d look at the polls and say, “Let’s readjust and come at this a new way…”

They don’t do that and the reason why is simple: they’re not here for you. They’re here for themselves and their communist agenda.

And they know they have a limited amount of time to get their junk installed, and they’re not allowing some silly “approval ratings” to stop them.

So, like I said, Joe’s getting crazier as his polls continue to flow down the toilet drain… it’s gotten so bad that he can’t even cover up the “radical stuff” if he tried.

That’s what happened on #MemorialDay, when Biden was discussing “Democracy” he had quite the Freudian slip.

Here’s what Joe said: “Democracy is not perfect. It’s never been good…perfect.”

NOW – Biden: “Democracy is not perfect. It’s never been good…perfect.”pic.twitter.com/cdh5bxNNHR

“Congress should quit lecturing Americans on Guns. The Mentally ill President of The United States has the Biggest guns protecting him”

“Ffs make him stop talking, please… This is insanity”

“When the truth is told by a demented man!”

“I try to stay out of politics but this Bozo makes me ill. I remember the men and women who fought and/or died for our Constitution, today.”

Trust me, Joe doesn’t think democracy is “good.” Not anymore, not after Trump breached the gate.

Now, all bets are off, and globalist politicians have declared “WAR” on the American people and everything we were founded on… all so they can gain more power and line more pockets.