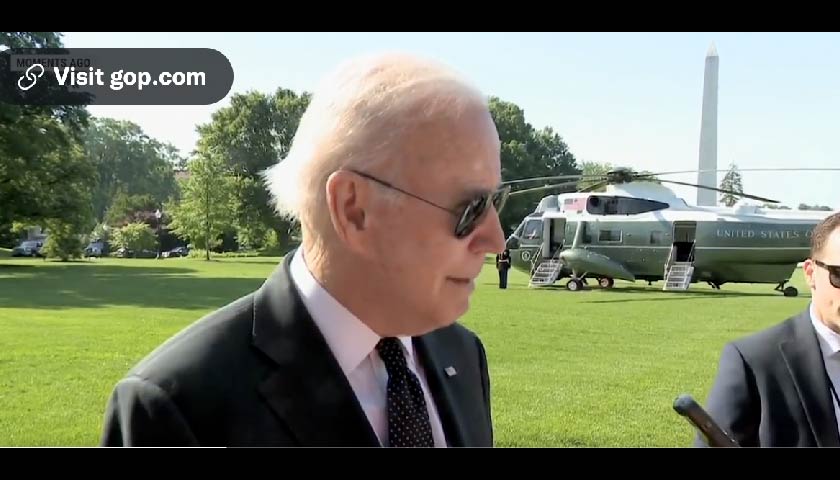 Why on earth are Americans forced to listen to a man who looks and sounds like he should be in a nursing home?

We shouldn’t have to sit here and pacify some frail old man’s political whims while he pretends to be “president.”

Yet, here we are.

So, on this #MemorialDay, what is Joe Biden doing to crap all over the country and piss off the majority of Americans?

That’s right, a man who likely makes his “stinky’s” in a diaper, is now telling us that the 2nd Amendment was never “absolute” anyway…

As you can imagine, this didn’t go over well online:

“The f☆ck it isn’t! “SHALL NOT be infringed…” Biden is a detriment to America. Biden, and his regime, are actively destroying America!”

“This really pisses me off. Either he’s *completely* out of his mind, or he’s completely cognizant and just lies like a rug. The fact that we can’t tell, just compounds the problem. Screw this dementia addled lying pit viper”

“Between the lines: The constitution isn’t absolute. Meaning we don’t have rights.”

“I hope we survive this senile old fool but we probably won’t.”

“Shall not be infringed” It’s the duty of the citizen to protect this land and their freedom from threats both foreign and domestic. Can we just use this as a litmus test for politicians ability to read already?”

“This is the reason the second amendment was instituted as ABSOLUTE. Don’t you see?? If they can convince you that the 2A isn’t valid unless they allow it, then they will quickly follow suit with the rest of them.”

“Holy hell the disinfo he says!”

“Did this idiot just say a 9mm is a “high caliber” bullet that can “blow the lungs out of the body?”

Also, I’d like to remind you that Joe Biden is the man who, throughout his entire political career, believed the 2nd Amendment was in place for “deer hunting.”

I kid you not… It’s true and well-documented.

The only way to stop these tyrannical communist Dems is to vote them out and vote out all RINOs who support them.