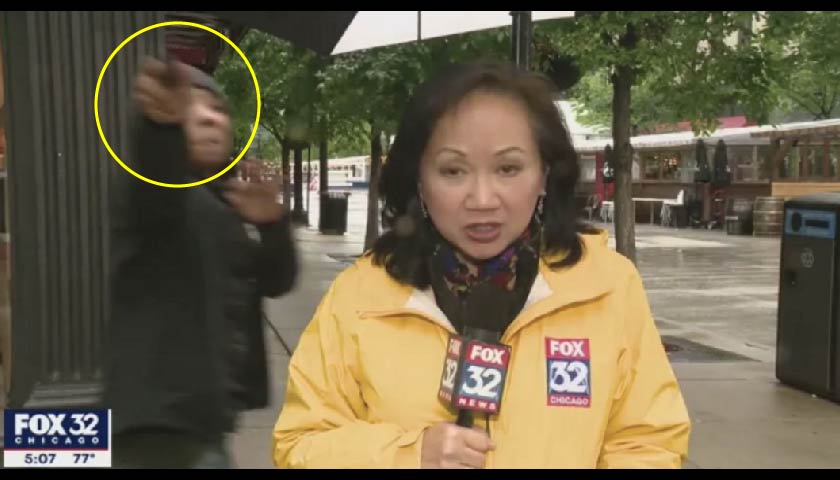 Joe Biden’s America is a scary and depressing place.

Prices and crime are soaring at unbelievable rates.

Liberal-run cities like New York and Chicago feel like they’re being run by criminals nowadays, thanks to Dem’s “Defund The Police” mantra.

And the criminals are brazen.

Just look at what happened in Chicago, when a local Fox news crew went LIVE on the streets of Windy City to talk about violence… a hooded man aimed a gun at the camera.

Fox News reported that Chicago police are asking for the community’s help in finding a man that is believed to have pointed a gun at a FOX 32 news crew during a live segment in the city’s River North neighborhood.

The Fox 32 crew was doing a live segment on gun violence Wednesday when a man walked behind reporter Joanie Lum and pointed what appeared to be a pistol at the camera as he passed by. He remained in view of the camera as he continued down the street, still appearing to be holding the firearm.

Police are calling the man a “person of interest” in the incident and have asked the community to help identify who and where he is. Anyone with information is asked to call the Chicago police at 312-744-8261.

Mayor Lightfoot has installed a curfew to slow down the crime wave.

It appears to be working; murders and shootings have gone down, now that kids under 18-years-old can’t be out past 6 pm without an adult.

But even though the numbers are going down, they’re still WAY TOO HIGH.

Lori Lightfoot is definitely in trouble this election season. Let’s see if the people of Chicago have the guts to send her packing before she completely demolishes the city.