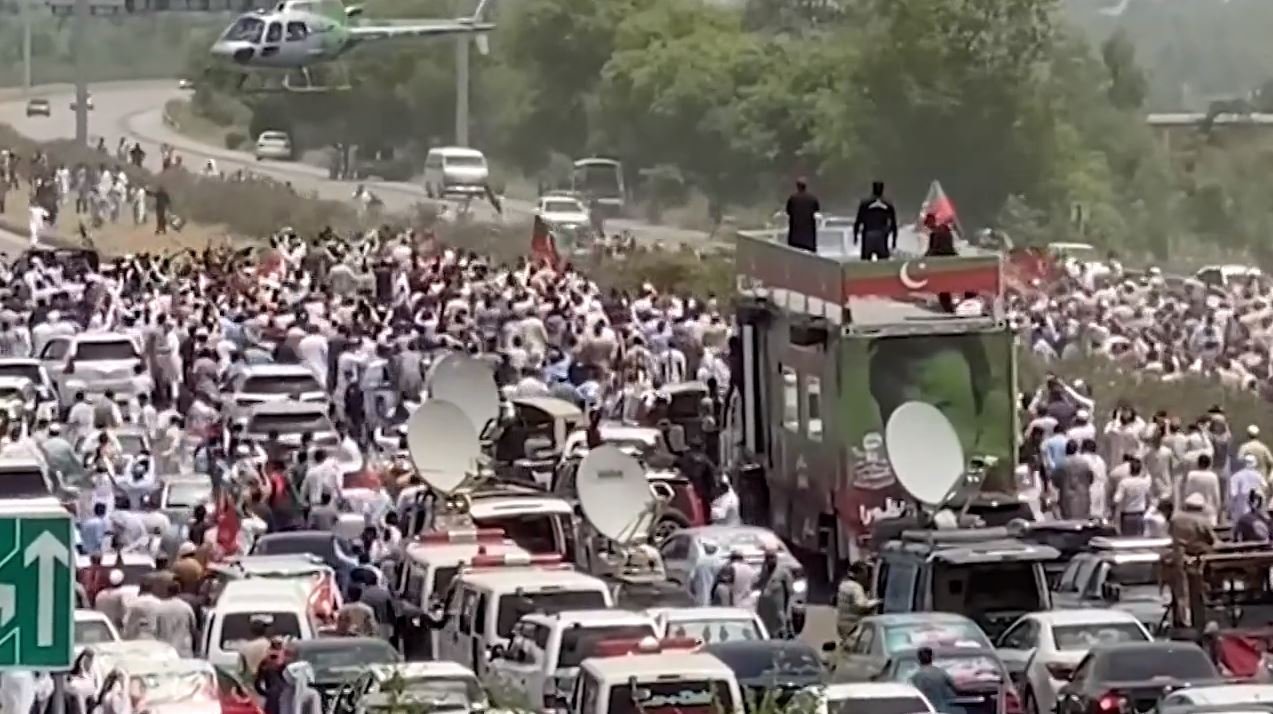 Ousted Pakistani Prime Minister Imran Khan and his huge protest convoy have entered the Punjab on their way to the capital city, Islamabad.

THREAD:
Pakistan is in revolt against what people claim is a “regime change” to oust former PM @ImranKhanPTI #حقیقی_آزادی_مارچ #امپورٹڈ_حکومت__نامنظور #MarchAgaintsImportedGovtpic.twitter.com/7HK5VjtgBM

The protest convoy goes on for miles.

We stand with Imran Khan

Pakistan is in revolt against what people claim was a Biden-Admin instigated “regime change” operation to oust former PM @ImranKhanPTI #حقیقی_آزادی_مارچ #امپورٹڈ_حکومت__نامنظور #MarchAgaintsImportedGovtpic.twitter.com/z1BFJz8NaN

The regime called out the army and is gassing its people.

The Pakistani regime is reportedly tear gassing its people in Islamabad at D-Chowk to disperse peaceful PTI supporters, as @ImranKhanPTI’s rally is about to arrive at the capital city#حقیقی_آزادی_مارچ #امپورٹڈ_حکومت__نامنظور #MarchAgaintsImportedGovtpic.twitter.com/ZJMZWomEnh

Nearly 4am, people are out on streets and showing unwavering support for their beloved leader Imran Khan. pic.twitter.com/TyeX9ptfn3 #حقیقی_آزادی_مارچ#LongMarch #AzadiMarchPTI

The marches have raised fears of major violence between supporters of Khan — now Pakistan’s top opposition leader — and security forces. The government of Khan’s successor, Shahbaz Sharif, has banned the rally and warned Khan he could face arrest if he went ahead with the demonstrations.

The country’s Supreme Court ruled Wednesday that Khan’s rally could go ahead — but only at a specifically allocated public grounds and on condition the demonstrators disperse after an address by the former prime minister. The court also asked Khan’s lawyer, Babar Awan, to ensure that the rally remains peaceful.

However, Khan persisted, urging supporters to head toward the square near Parliament for the rally that he plans would evolve into a sit-in there until the government resigns. The government summoned troops to guard important buildings, including the Parliament and offices of the president and prime minister in Islamabad. The measures come following clashes between demonstrators and police.