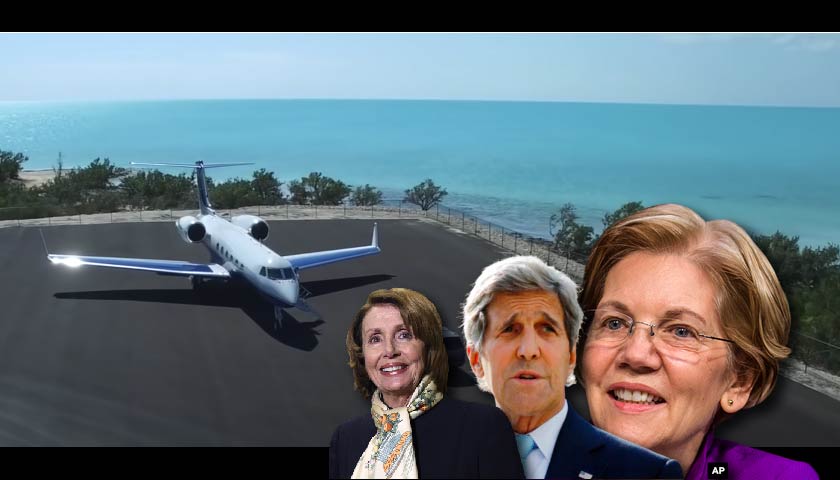 Ya know, when we see these scumbag elites flying their gas-guzzling private jets to climate events and Davos, to discuss the “New Green World Order,” we often call them hypocrites.

And is it hypocritical to preach about small “carbon footprints” while running around spewing jet fuel all over the world… that’s true.

But that’s not why the elites do it… it’s so much bigger than that.

The globalist elites don’t cluelessly act like hypocrites. They’re not bungling through life, not understanding what’s right and wrong.

Trust me, they may live in a bubble, but these people all know what’s right and wrong and they’re not confused about their own behavior.

So, when they fly into Davos on a private plane to join the World Economic Forum, what’s going on in their minds?

Why do they do it?

Well, conservative radio host Jesse Kelly has the best and most accurate answer.

They do it because they can and you can’t.

Here’s what Jesse said: “REMINDER: The elites don’t fly private jets to “climate change” conferences because they’re hypocrites. They fly them because they believe they are of a higher class than you and should have things you don’t deserve.”

They fly them because they believe they are of a higher class than you and should have things you don’t deserve.

This is why calling liberals “hypocrites” doesn’t work.

They don’t care about hypocrisy. It doesn’t even register on their radar as something to worry about.

The only people who care about hypocrisy and fairness are conservatives.

Liberal elites believe they’re better than you, and they like reminding you of it.

And the only successful way to attack these commies is to mock them.

They can handle being called hypocrites, liars, and cheats…

But they can’t handle being mocked and made fun of.