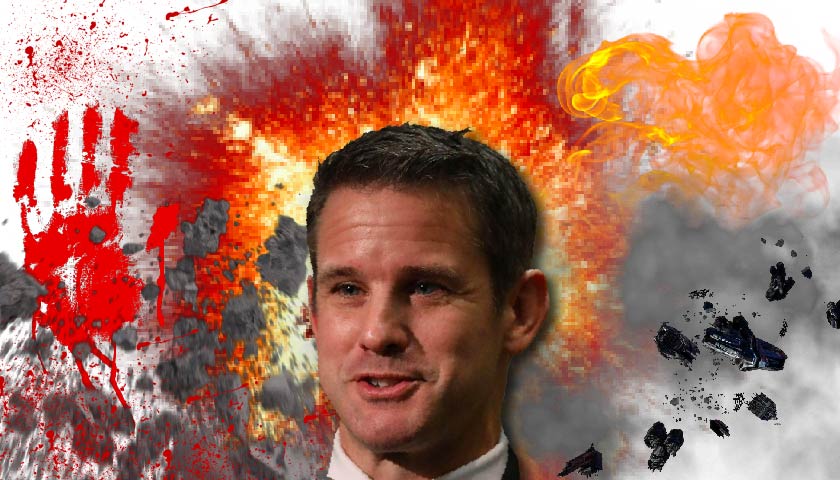 War is not pretty… many people die, some are monsters, sure, but many aren’t. Either way, it shouldn’t be treated like a football game, because it’s not.

Like they’re one big “Squid Game” for the elites. That’s a reference to the Netflix series. If you’ve seen it, you’ll know what I mean.

What’s happening between Ukraine and Russia feels like a “green screen” war. There’s so much propaganda and “cheerleading” surrounding it that it’s causing a lot of confusion and conspiracy theories to pop up.

Americans are suspicious, and you can’t blame them… there’s a huge lack of trust between the American people and DC right now.

MORE NEWS: COVID Relief and Foreign Aid: What Do They Share in Common? One Viral Tweet Explains in 3 Quick Sentences

Add to that the fact that Joe Biden just sent Ukraine another 40 billion, while Americans are suffering through his rotten economy, sky-high inflation, and soaring gas prices — not to mention the baby formula shortage.

And in the midst of all that, we’ve got GOP warmongers and traitors like Adam Kinzinger putting out really vulgar and gross tweets about dead Russian soldiers while responding to Russian officials.

Here’s what the Russian official said: “Good occasion to celebrate! But still a lot for us to do to de-Nazify #NaziUkraine #nazisinukraine #Marioupol #Azovnazis #Azovstalsurrender ”

Here’s what Adam said in response: “Coincidently, I’m celebrating the 27,000 dead Russian soldiers and a bakers dozen dead GENERALS! How embarrassing for you!! #SlavaUkraine“

“Kinzinger, like Crenshaw are good at only one thing–taking orders Dumb obedient Dogs and they’re proud of it”

“What a little pr*ck. Imagine if Trump tweeted this”

“This disgusting POS was “too principled” for the GOP with Trump at the helm. War is shit. It’s most shit for the poor foot soldier who sees no benefit, but only pain and has no choice. Being gleeful over the war dead is worse than anything Trump ever sad.”

“Grossly irresponsible Tweet from a sitting member of Congress. We have not declared war on Russia. Kinzinger is the embarrassment.”

“This is gross. Truly unbecoming of any elected American official. And it doesn’t help the Ukrainian people (whose flag he puts before our own) one bit.”

“You are a sick person and deserve a special place in hell. Trump isn’t the problem with the GOP. It’s the rest of them.”

“I got a twelve hour cooldown once for calling this guy an effing warmonger. I was wrong. He’s an effing ghoul.”

“This is ghoulish and doesn’t help Ukraine at all, let alone the USA. How many of those Russian soldiers were teenagers from villages in places like Dagestan who basically had no choice but to go to Ukraine to die for a dictator’s delusions? It’s depressing; no reason to celebrate”

“Never Trumpers are in a cut-throat competition to see who can present themselves as most cringeworthy. Fierce, fierce competition.”

“Arguably the most dangerous man in office. Doing everything in his power to draw the US into direct hot conflict with Russia by taunting their UN representative, bragging about Russian soldiers KIA using US weapons and surveillance. Astonishing.”

“This is a horrible person.”

“I am not joking when I say that neocons support endless war as a form of ritual sacrifice. They would shrivel into dust without it”

“These people celebrate war and death, remember who you’re up against”

“Myself and many other citizens of the United States are embarrassed to have such a dishonest, inhumane, incompetent POS like yourself in office. No wonder why your family has shunned you.”

“Imagine tweeting this and think it’s embarrassing for anyone else”

“There is a special place in hell for warmongers like you.”

“What kinda satanic psycho celebrates the death of 27k people? These people really are a part of a death cult. Death and destruction is their religion.”

That’s fine if you want to support Ukraine, but let’s remember, these aren’t football teams.

One of these countries is a superpower with nukes, and the other is bleeding American taxpayers dry.

This is nothing to “celebrate” at any level, and Mr. Kinzinger should know that.