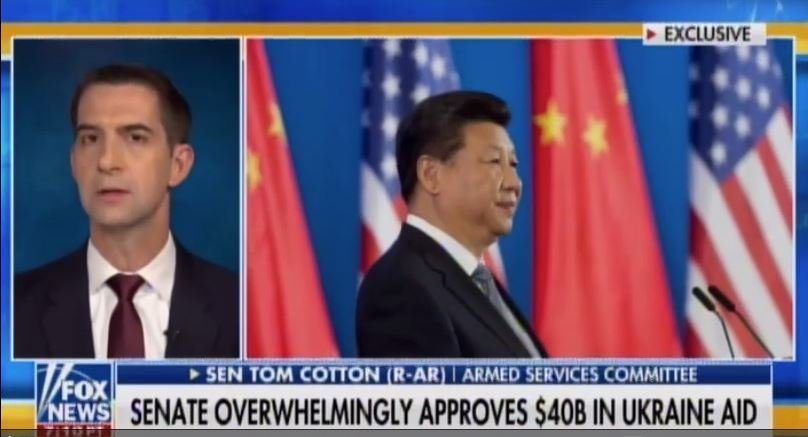 During their discussion Senator Cotton argued that the US Congress had to give $40 billion to Ukraine in military aid or China will attack Taiwan. This was after they were discussing the record inflation rate in the US today.

And he’s the good Republican in the US Senate!

Tom Cotton: It’s important that we support the Ukrainians as they defend themselves against this war of aggression by Vladimir Putin. So, first off I do understand the reservations some people had about the legislation. And there was some excessive or unnecessary measures. But a lot of that money went to support our own military and our own troops to replenish the stockpiles of our weapons that those troops need to defend themselves and protect our country. And not just support our allies in Europe but in the Western Pacific, Taiwan in particular. Second, I think it is important that we help the Ukrainians fight their own war. This is much like what Ronald Reagan did in Afghanistan… And finally, I think our main adversary Xi Jinping and the Chinese Communist Party is watching very carefully what is happening in Europe. If they see the United States and our allies falter in our resolve to support Ukraine in defending itself against an invasion by Russia, then I think Xi Jinping would believe that there is no way we would come to the aid of Taiwan.

The post Senator Cotton: We Needed to Give Ukraine $40 Billion or China Will Attack Taiwan appeared first on The Gateway Pundit.