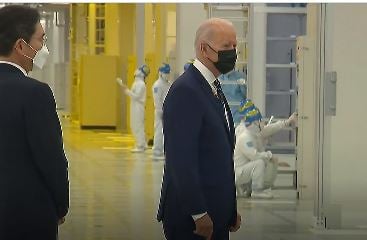 Joe Biden landed in Seoul, South Korea on Friday for meetings with the new leader.

In his first remarks after landing Joe Biden looked exhausted, his voice was weak and he slurred his words again. This is more typical for Joe Biden than it is not.

After Joe Biden touched down in Seoul Communist China buzzed Taiwan with a dozen fighter jets, bombers and other aircraft.

According to Asahi Shimbun — Taiwan scrambled fighter jets on Friday as 18 Chinese aircraft buzzed the island, crossing the sensitive midline of the Taiwan Strait, in response to a senior U.S. official holding talks in Taipei.

Earlier in the week on Wednesday China’s most powerful bombers circled U.S. military bases in Okinawa, Japan. This was just two days before Joe Biden’s trip to Seoul.

The post China Buzzes Taiwan with Fighter Jets and Bombers and US Bases in Japan as Joe Biden Travels to South Korea appeared first on The Gateway Pundit.