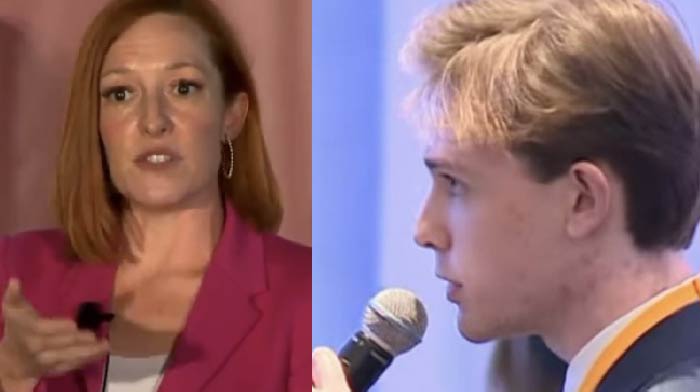 Jen is no longer part of the embarrassing circus also known as the “Biden admin,” but don’t worry, she’s still a clown.

She’s on her way to MSNBC, but she made a pit stop in Chicago.

Psaki appeared at the University of Chicago Institute of Politics at one of those snooty “think tanky” type symposiums, where she talked about working as Biden’s #1 Spin Doctor and the current state of the media.

She took questions from the crowd, and that’s when things got very dicey for Jen.

Red State reported that a reporter from the University’s “Chicago Thinker” independent newspaper stepped to the microphone and questioned her over her comments from earlier this month when she stated in response to a question about radical pro-abortionists protesting outside of the homes of conservative Supreme Court Justices that “We certainly continue to encourage that [what she called “peaceful protests”] outside of judges’ homes.”

The problem with that answer is that it completely ignored the inconvenient fact that U.S. Code states protests outside of the homes of judges with the intent of influencing (read: intimidating) them to rule one way or the other are unlawful and are subject to fines and/or a year in prison.

It is perhaps with that thought in mind that “Chicago Thinker” journalist/senior editor Daniel Schmidt rose from his seat to ask her about those remarks and if she regretted them. After he asked the question, Psaki first astonishingly denied she said exactly what she said. Schmidt then held up his phone and said he was quoting her. Psaki then tried to insinuate that because he left the word “peaceful” out of his question that he was lying about what she said. Schmidt correctly pointed out that “peaceful” or not, she and the rest of the Biden White House advocated for unlawful protests outside of the Justices’ homes.

Jen did her usual Texas Two-Step around the truth, and lots of bobbing and weaving claiming she didn’t encourage anyone to protest. All innocent Jen did was encourage people to engage peacefully…

How shameful is it that a student reporter is more professional than 90 percent of the so-called “reporters” in the fake news media?

This kid is asking the questions that Americans want answers to.