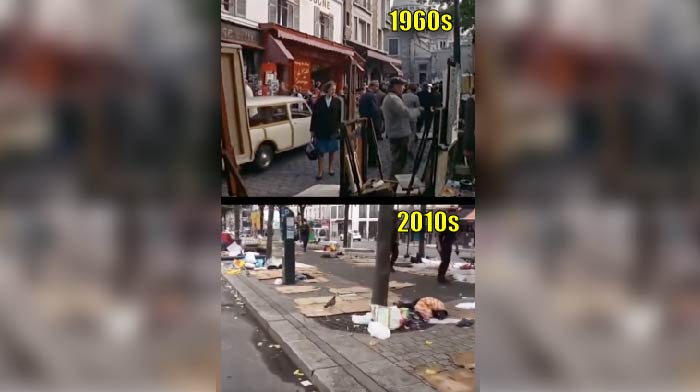 We hear a lot about how Paris — and much of Europe — has gone down the tubes thanks to globalization.

It turns out that “diversity” and globalism really aren’t everyone’s strengths, especially when the two are now swallowing whole all the beautiful culture, emotion, and magic of the cities it takes over.

That’s not to say that a mixture of cultures does not give a city amazing spice and life… it does. It’s one reason I love New York so much (when it’s not a crime-riddled liberal hellhole).

But in NYC and other similar cities, the cultures all sort of blend together and make this magical, amazing stew.

Everyone might be different, but there’s common respect and appreciation for everyone’s differences.

But forcing large swaths of people to take over a city, who do not believe in embracing or appreciating other cultures, will eventually lead to its downfall.

So, that’s the sort of thing I was thinking about when I watched this video clip that shows the side-by-side difference between how Paris looked in the 1960s versus the 2010s.

I watched this clip, and I thought about how liberals, who love diversity and welcoming every refugee on earth, are always preaching to us we’re not caring for the planet, but they’re perfectly okay with how their liberal-run cities look?

They tell you and me we’re eating too much beef, and mowing our lawns too often, but they have nothing to say about the utter decay of their cities that were once thriving and beautiful?

When you think about it, isn’t THAT the true “destruction” of our planet?