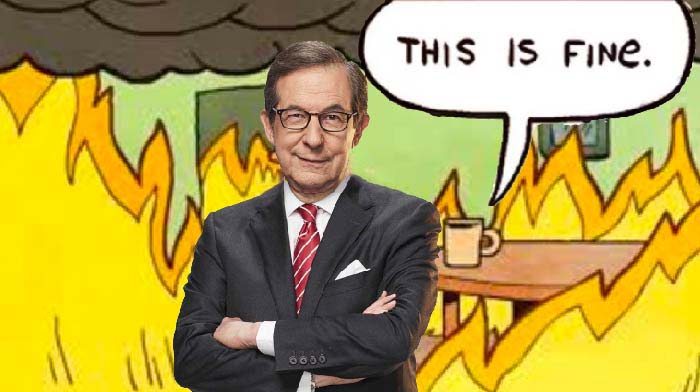 Well, Chris Wallace, who was reportedly ready to yank his own hair out after the humiliating death of CNN+ now has his new career marching orders.

After much speculation and many wondering what Chris would do after his embarrassing failure — especially since Fox News had no interest in bringing him or his low ratings back — we now know that he will actually stay with CNN and he’ll have his own show.

Rumors flowed Wallace would take over Chris Cuomo’s spot — but that’s not what’s going to happen.

Chris will be the new “Sunday” guy, over at CNN.

Axios is reporting that Warner Bros. Discovery, CNN’s new parent company, plans to announce during its upfront presentation to advertisers on Wednesday that Chris Wallace will host a Sunday evening show on CNN.

Why it matters: The longtime Fox News host had recently moved to CNN to launch a show on its now-defunct streaming service, CNN+.

Details: Wallace, who was hosting an interview show four days per week on the streaming service, will move to a weekly Sunday evening show on CNN’s linear network, two sources tell Axios.

Later during the presentation, the network confirmed the move and noted that Wallace’s same interview show from CNN+ will debut this fall on HBO Max and will be on CNN Sunday evenings.
The big picture: Warner Bros. Discovery executives haven’t been shy about their intentions for CNN, saying repeatedly that they want to focus the network’s future on nonpartisan reporting instead of personality programming at primetime.

Speaking at the upfront event, Warner Bros. Discovery CEO David Zaslav CNN, “At a time where most news networks are advocacy networks, we at CNN intend to advocate for journalism first.”

So, Chris Wallace, who claimed he left Fox News because of his amazing “integrity,” will now be the cornerstone of the biggest fake news production on TV.