Pennsylvania Lt. Gov John Fetterman (D) is undergoing surgery to implant a pacemaker with defibrillator Tuesday afternoon according to a statement by his Senate campaign. Fetterman, 52, who was leading in polls before today’s election, suffered a stroke last Friday from a blood clot due to atrial fibrillation. His campaign posted a photo of Fetterman filling out an emergency absentee ballot in his hospital room before the operation was announced. 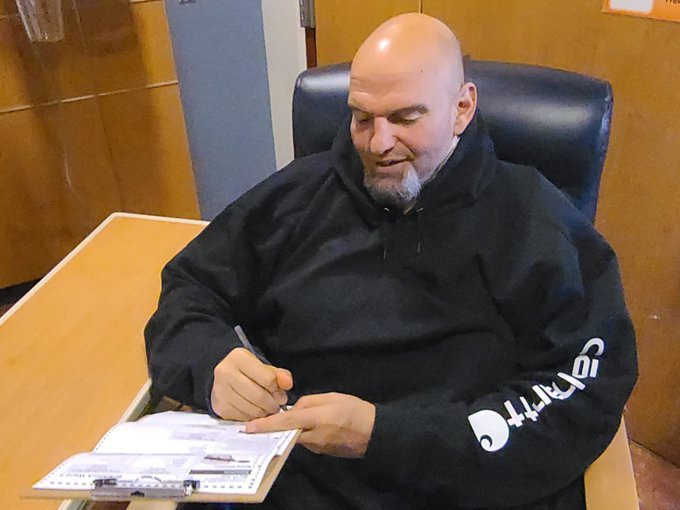 “John Fetterman is about to undergo a standard procedure to implant a pacemaker with a defibrillator. It should be a short procedure that will help protect his heart and address the underlying cause of his stroke, atrial fibrillation (A-fib), by regulating his heart rate and rhythm.”

INBOX | Pennsylvania Lt. Gov. John Fetterman, the likely Democratic nominee for Senate in the Keystone State, is getting a pacemaker today. Fetterman suffered a stroke over the weekend. pic.twitter.com/qBPaGO6Eg7

Photo of Fetterman filling out a ballot released Tuesday:

Video released Sunday from the hospital.

On Friday, I wasn’t feeling well, so I went to the hospital to get checked out.

I didn’t want to go – I didn’t think I had to – but @giselefetterman insisted, and as usual, she was right.

The good news is I’m feeling much better + I’m well on my way to a full recovery. pic.twitter.com/WQ5X6QgQen

A poll released May 5 showed Fetterman ahead of Congressman Conor Lamb 53 percent to 14 percent in the Democrat primary.