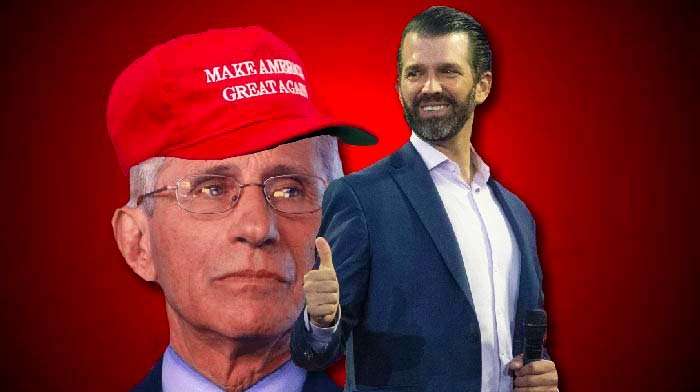 I gotta tell you — President Trump just got the biggest and best 2024 endorsement of his lifetime.

It all unfolded when Dr. Fauci appeared on the low-rated CNN show hosted by unserious fake news reporter Jim Acosta.

The little worm announced he would quit if (when) President Trump is re-elected in 2024.

Well, of course he would… Trump would fire him within 2 seconds of taking back the White House and then do all he could to have Fauci’s tiny butt thrown in prison.

Fauci isn’t dumb enough to put himself on the chopping block like that.

Speaking of tiny, did you ever see this photo?

Maybe it’s a slight exaggeration of his size, but you get the idea…

Anyway, the entire internet was celebrating with joy when news hit that Fauci would finally be gone.

And nobody was happier than Don Jr, who took to Twitter to celebrate.

Here’s what Jr. said: “As if we needed yet another reason to elect Trump!!!”

As if we needed yet another reason to elect Trump!!! https://t.co/UMby3XQYM5

Honestly, I’d be shocked if Fauci sticks around after 2022.

The right will be GUNNING for him, and he has reason to be worried.

We all know this little ghoul has so many skeletons in his closet that he could open a Halloween USA supply store.

I think Fauci is just setting up his “retirement” announcement now, so it doesn’t come as a huge shock to the liberal zombies who support him when he tucks tail and makes a run for it.