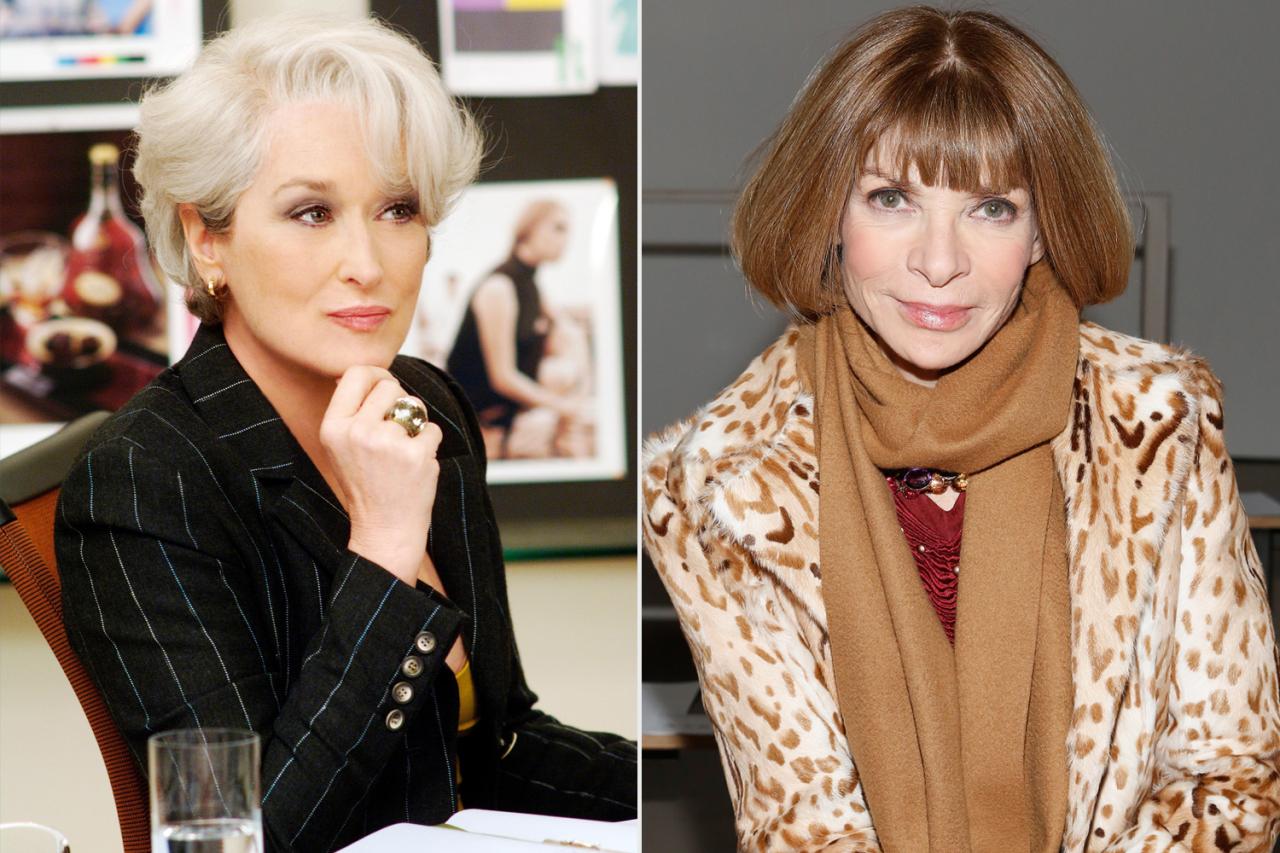 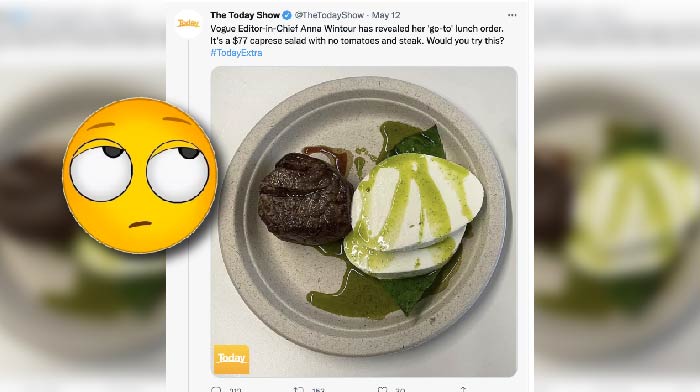 I guess nobody at the Today Show realizes that many Americans are barely getting by, thanks to Biden’s inflation.

Heck, half of the country’s babies are going hungry because parents can’t find baby formula on Biden’s bare shelves.

So, why in God’s name did the Today Show think it was a good idea to post a photo of the Vogue editor’s $77 dollar steak lunch and ask America if they’d order it?

The lunch photo is ridiculous, especially to anyone who’s scraping by trying to feed their family right now… it’s this very petite filet steak, and two slices of mozzarella cheese, a couple of leaves of basil, and some pesto… all for $77 bucks.

I mean, what a bargain, right?

Why are elites so damn stupid?

I love your segments that help regular people find ways to save money when inflation is rampant. Good job.

Here’s a closeup of the photo: 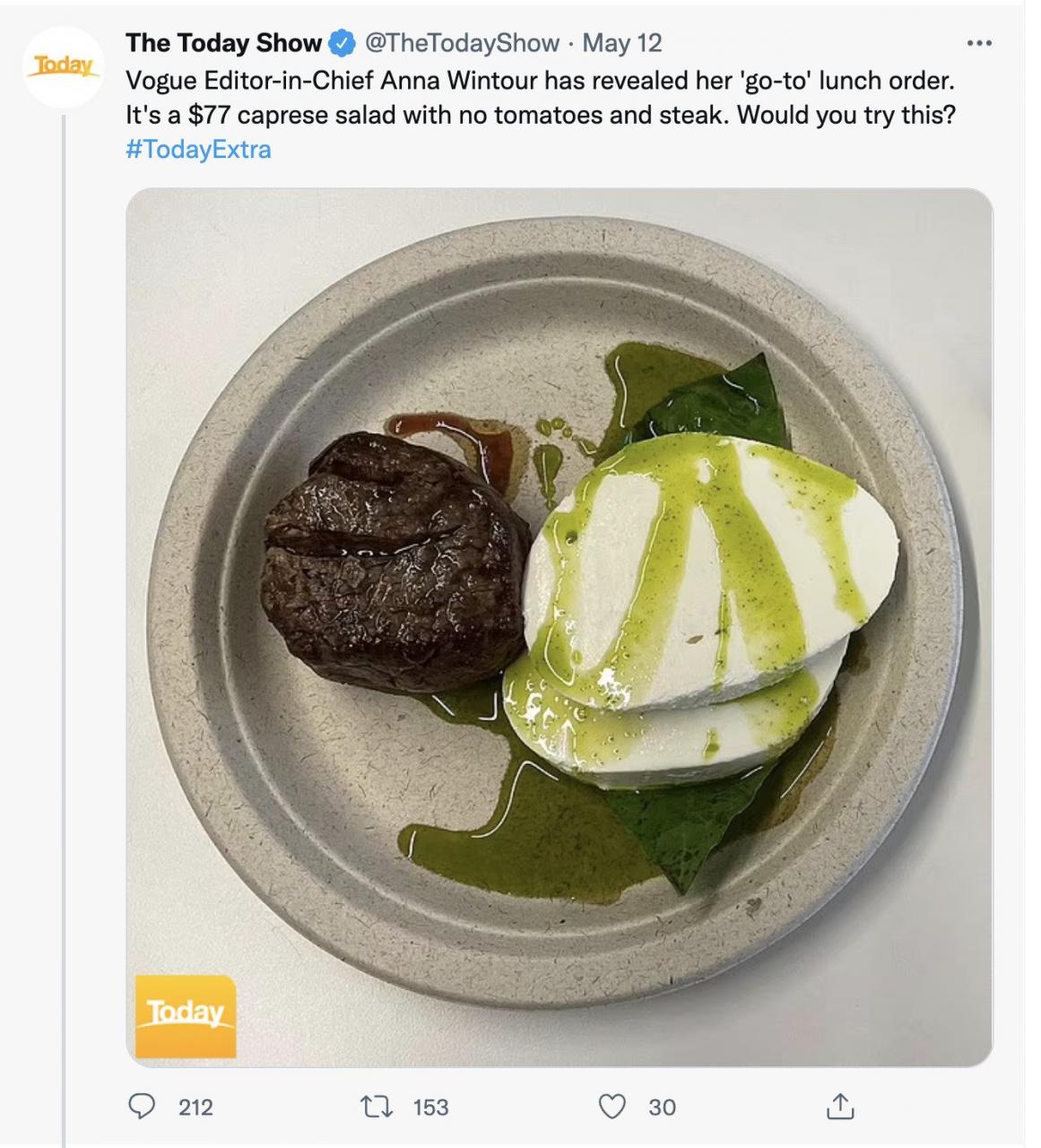 Let’s not forget that Anna Wintour is the woman who was portrayed by Meryl Streep in the film “The Devil Wears Prada.”

According to that movie, she’s not a nice person… AT ALL.

“I love your segments that help regular people find ways to save money when inflation is rampant. Good job.”

“There’s no baby formula. Americans can’t afford gas or food! But the @TheTodayShow is tweeting that elitist Anna Wintour pays $77 for bullsh*t lunch. F**k off demons”

“77 dollar lunch? F**k off, Today Show, I can’t even afford chicken to feed my family”

“Example 8 million illustrating that the #press represents a circle jerk of #ivyleague fools who don’t see an issue paying 77 dollars for lunch.”

“Why are you showing this to the commoners?”

“+/- 20,000 a year on just lunch. Typical woke idiot who pretends to speak for the oppressed. Would you try this? No I’d buy a whole loin and cut it up and have dinner for days. You know cause I’m not a rich woke elitist harping on racial issues and climate change.”

“these people have no idea about the real world”

“>Cheese on a leaf with a tiny meat slab and sauce jizzed on everywhere >$77 How to scam dumb rich people starter pack.”

“They’re so out of touch, it’s really astounding”

“But us plebeians are supposed to eat cashew cheese, impossible meat, fortified starches, and bugs”

“No, I wouldn’t. Not that I don’t think I’d like it, but thanks to #BidenInflation we currently could never afford this for one lunch. The elites actually hate the blue collar worker.”

“Lifestyles of the Limousine Leninists.”

“Time to break out the guillotines”

Clearly, there are some clueless, highfalutin elites running the social media account over at the Today Show.