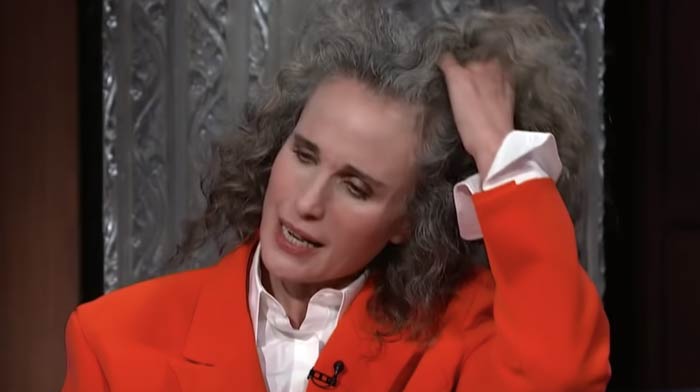 How can anyone take these goofy, overdramatic liberal loons seriously?

The way these so-called “adults” behaved when President Trump was elected, and beyond was embarrassing and shameful.

It was like watching toddlers throwing hissy fits for five-plus years.

Yet, even so, these underdeveloped, emotionally stunted people think they’re the “adults” in the room, which is really rich.

Can you imagine how Andi handles real trauma in her life? She’s probably a basket case 24/7.

You’d think she’d be embarrassed to share this, but for liberals, “political performance theatre” is a badge of honor.

Breitbart reported that the election of Donald Trump and a room full of men drove actress Andie MacDowell into what she says was her first panic attack.

“I had this kind of crazy experience, right after Trump got elected. I was really disturbed that nobody seemed to care about the vagina[-grabbing] comment; I had gotten really sad. I went to do a job, a day’s work, and I had my very first panic attack,” the Groundhog Day star said in an interview with Marie Claire.

“I was getting ready to shoot something, and I turn around and it’s, like, a roomful of men. Like, a sea of men. It flashed on something that was personal for me. And I dropped to my knees. I left the room, and went into this fake bathroom on the set, and looked at myself in the mirror and said, ‘Get your shit together.’”

Andie MacDowell didn’t mention the film she was shooting but said the experience “freaked me out, not seeing any other women. It’s not that I have anything against men. I don’t! I just don’t like big groups of them. Since then, I’ve become very conscious of looking around and finding the women on set. For comfort.”

Uh, I have news for you Andie, most women don’t like other women.

See, as women, we’re hip to how many women manipulate, backstab, and try to hurt each other.

This idea that there’s some “Kumbaya” lovefest happening between women is a hilarious joke.

Also, clearly, Andie has some emotional development issues and isn’t “all there” mentally speaking.

As for what movie set she was on, she shot three films that were released in 2017: Only the Brave, a Josh Brolin/Miles Teller elite firefighters film; Love After Love, about two grieving siblings; and Netflix yuletide comedy Christmas Inheritance. All three had primarily male crews, and most of these movies no one on earth has ever heard of.