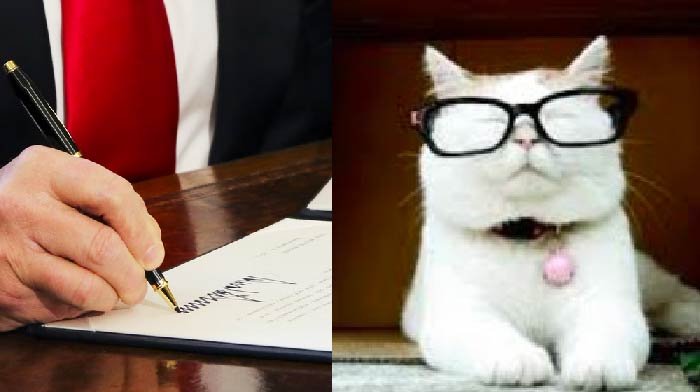 There’s a very popular MAGA Twitter personality who goes by the name “Catturd.”

In real life, he’s a 50-something-year-old “country boy” who has a lovely ranch and a bunch of animals — several that are “rescued” animals, which is really special.

Catturd has a great sense of humor and has a real knack for triggering liberals, which is always a bonus. It’s an amazing account, and I’d encourage you to follow him here.

Well, recently, the guy behind the Catturd name had a medical scare.

He was in the hospital twice, thanks to a bowel blockage… scary stuff. I followed his situation on Twitter, like tens of thousands of other concerned fans, including the MAGA King himself, President Trump.

MORE NEWS: [VIDEO] Melania is BACK and She Just Took a Flamethrower to Sleepy Joe

President Trump saw Catturd was sick, so he printed out his tweet describing his medical situation, and wrote a quick “get well soon” message to him.

Now, I don’t know how Trump got the actual note to Catturd, but I am sure the MAGA King has his ways…

I love how Trump called him “C” in the note. He didn’t have it in him to write out the word “Catturd,” and that’s probably for the best… ha ha ha!

As you can imagine, Catturd was so excited, and he shared the amazing note on Twitter, saying how humbled and excited he was.

I don’t blame him. I think that note says a lot about how much people love Catturd, and also shows how thoughtful and kind President Trump truly is.

Here’s what Catturd said: “Wow – everyone knows about my recent hospital stay – I just received a handwritten get-well message from President Trump. What a great person to do that for an old country, average person like me. So humbled. So excited.”

Wow – everyone knows about my recent hospital stay – I just received a hand written get well message from President Trump. What a great person to do that for an old country, average person like me. So humbled. So excited. pic.twitter.com/eu0BZ77Pkc

“What an absolutely fantastic human being. This is why I admire 45.”

“Donald Trump is a prince among men.”

“Whatever his failings, Trump is the most human and also the most decent President we have had in a long, long time”

“Our President is Awesome, he is the Best!! Thank You President Trump for all that you do!!”

“This Wins the Internet for Today!”

“The Maga King sending greetings to the Maga faithful.”

I just have to say, God Bless Trump for being the “Blue Collar Billionaire.”

He’s the people’s president, and that’s why we love and support him.

I am really pleased Catturd shared that note, and I also hope that he’s feeling a lot better.

We need him in this fight to save the soul of our country.