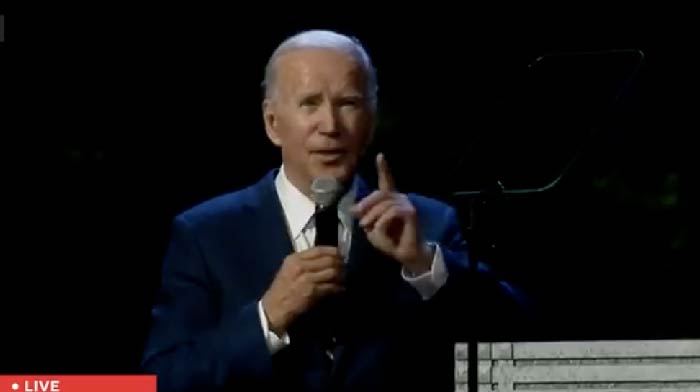 As some of you may know, I am a former PR and marketing pro, so when I assess politics, much of that comes from a “PR” lens.

And I gotta say, I am downright flabbergasted by this latest messaging from Team Biden. It’s such a bad idea on so many levels, that I’m starting to wonder if there’s an ULTRA MAGA mole inside Biden’s admin who is sabotaging them with “bad ideas.”

So, the latest move from Team Biden is to bring President Trump back into the mix. They want him on the “ballot” in 2022.

Why is that a stupid idea? Well, for several reasons, but the biggest would be “Virginia.”

They tried this strategy in Virginia, and Youngkin won handily… And since Youngkin’s race, Biden’s approvals have slipped more, and the country has grown more agitated and annoyed at Biden’s ineptitude and failed policies, so the chances of this “Trump on the ballot” plan this time around is actually worse than it would have been the last time it failed in Virginia.

Also, mocking half the country and calling decent American voters “extremists” isn’t the best idea, especially after you’ve pledged to “unify” the country.

But all Biden has to do was call up his good friend Hillary and ask her how that Basket of Deplorables worked out for her.

And speaking of mocking MAGA… You’re going to need to get up pretty early in the morning and be really damn sharp to pull off any real “hit” against MAGA. This is an extremely powerful movement of dedicated patriots, righteous warriors, meme artists, and really clever and savvy internet influencers… I don’t think some confused, dusty bag of bones like Joe Biden is up to the task.

A man who slurps tapioca through a straw will not be the political assassin who “takes down” MAGA, I promise you that.

As a matter of fact, Joe has actually helped the MAGA brand lately. We’re loving the “ULTRA MAGA” moniker, and we’re kicking ourselves for not thinking of it first, so thanks for that.

We’re having hats and T-shirts made as we speak.

The latest one is The MAGA King, and let me tell you, it has a nice ring to it, and people already love it. I think it’s gonna go FAR.

And Trump loves it. Look what he just posted on Truth:

Again, how could we not have thought of this?

Biden refers to Trump as “the great MAGA king.” pic.twitter.com/tkONV6dbxf

“The other day it was UltraMAGA, now it’s The Great MAGA King Is Biden trying to tell us how awesome MAGA is??”

“Remember how trump was famous for giving people really demoralizing and brutal nicknames? This is like the opposite of that. This nickname is GREAT lol”

“The only reason Trump will be mad at this is he didn’t think of it first. #MAGAking“

“Sleepy Joe is actually good for something now. He came up with really cool names for us and Trump”

“I am begging Joe to stop making Trump sound so cool”

“And suddenly, a billion t-shirts were born.”

“Biden is historically bad at insults. Tomorrow he’s gonna be like “Trump, or as I like to call him, BADASS FU**ER IN CHIEF, amirite guys??”

It’s hilarious to me… I watch this unfold, and I think to myself, in the era of memes and internet trolls, why in the name of everything holy would you hand your “enemy” something like ‘The MAGA King” to play with and throw in your face?

Team Biden is just out of their league.

They truly do not understand how social media and how memes work, which is a good thing for us because if they did, they wouldn’t be using this messaging which is wonderful for MAGA.

I get it, they’re trying to fire up their base and get them enraged about Trump again, because Biden does nothing for them, but it’s backfiring.