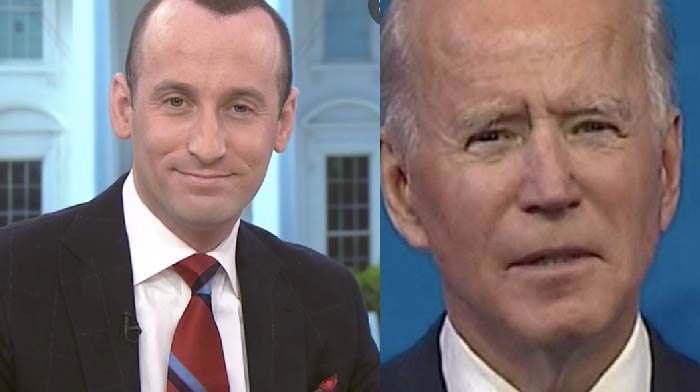 Well, for starters, they’re making a massive PR/messaging mistake by putting President Trump and “MAGA” on the ballot this 2022 midterm.

This move backfired epically in Virginia when Glen Youngkin won, and it’s going to backfire even worse in 2022 because Biden’s polls have crashed harder, and the country is more fed-up with his failed policies than ever before.

At a time when a record number of Americans are wishing we had President Trump back, Trump’s polling is soaring and Biden’s is cratering, calling attention to MAGA and “King Trump” is probably the last thing you want to do.

But that’s Biden’s team for ya — they are utterly clueless.

And Trump’s most loyal advisor Stephen Miller was right there, ready to take Biden’s “ULTRA MAGA” scheme and blow it up in his wrinkly old face… and holy wow, he sure did just that…

Again, this is the LAST thing you want to do if you’re Bumbling Joe Biden. You don’t want to remind Americans of all your failures by putting them up against all of President Trump’s accomplishments.

Everyone knows that the country is far worse off today than it was under President Trump’s competent and amazing leadership.

Joe Biden has botched everything from Afghanistan to COVID to the economy and world peace.

There is NOTHING that’s better today than it was when Trump was in office.

Crime is soaring in liberal-run cities, our borders are wide open, the country is more divided and angry, and the middle-class and poor are being decimated by Biden’s “Green New Hell Deal” agenda.

But this is the quandary facing Team Biden — Joe’s done NOTHING and excites nobody, so they have to turn to the one guy who’s done so much, and stirs so much passion (Trump) to try to get their base moderately engaged in the 2022 midterms.

But while it might get a few TDS kooks engaged, it’ll definitely make many more people long for the good ol’ days when the economy was soaring, and there was peace all throughout the world… that’s great for our cause, so let’s hope Team Biden sticks with this crazy “MAGA” plan of theirs.