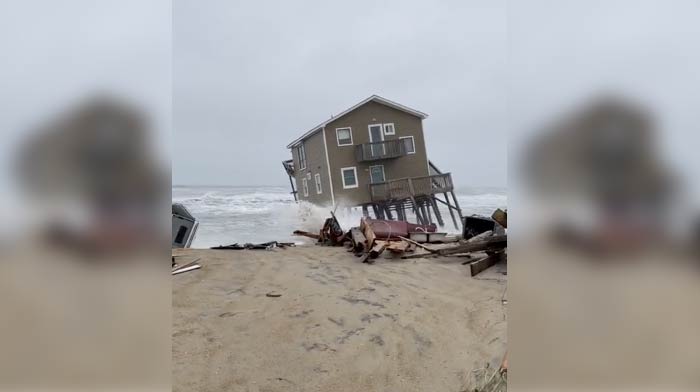 The video of a beach house on stilts crashing into the ocean has gone mega, mega-viral, with almost 5 million views as of this publishing.

Thankfully, the house was not occupied when it was swept away by a wave.

Zillow now estimates this “houseboat” is worth $489,350… just kidding.

Actually, according to Fox 5 San Diego, it was two houses that crashed into the ocean.

Two beach houses on the Outer Banks of North Carolina collapsed Tuesday, and one collapse was caught on video.

The National Park Service shared news of the first collapse in Rodanthe on Tuesday morning and said the beach was closed to protect the public from hazards.

Hours later, officials reported that a second home in Rodanthe collapsed. It was captured on video and shared by the park service. One final wave sent the home crashing into the ocean below.

Both houses were unoccupied at the time.

This is the same area where a home collapsed into the ocean back in February.

“Unfortunately, there may be more houses that collapse onto Seashore beaches in the near future,” said David Hallac, superintendent of the National Parks of Eastern North Carolina. “We proactively reached out to homeowners along Ocean Drive in Rodanthe after the first house collapse and recommended that actions be taken to prevent collapse and impacts to Cape Hatteras National Seashore.”

An unoccupied house on stilts in Rodanthe, North Carolina, as it collapses into the ocean this afternoon.
Was worth $381,200 according to Zillow. pic.twitter.com/RxkgOkBIv0

This incident has left-wingers online convinced that this is “climate change” proof that the seas are rising and coming for all of us.

Someone better tell Obama, and Bill Gates, since they own waterfront property.

In actuality, it’s erosion and the fact that someone poorly built the homes back in the 80s… but hey, we hate to ruin a good “climate change” tragedy.