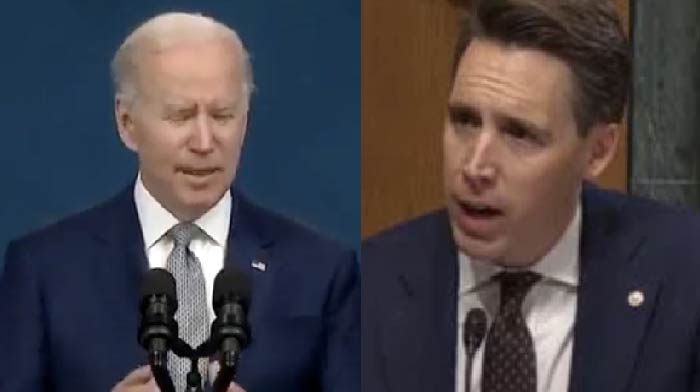 Joe Biden is a senile old coot. We all know this, we see it every day, I get tired of saying it, and I am sure you’re tired of hearing it… but the last thing we can do is let it become “normal” and stop reporting on it.

That’s what they’re hoping we do.

We will call out all of his blunders and dementia moments, no matter how redundant it gets, because they installed a man with “Alzheimer’s” into the White House so they could control him like a puppet and ruin our lives in the process and we won’t let them or anyone else, forget it.

And it appears to be working — we’re at least seeing some movement from Republicans who are now reacting to Joe’s mental sickness like Josh Hawley just did when Joe Biden claimed that our nation’s strength is actually “inflation.”

Yes, during yet another disastrous presser, filled with slurring, confusion, and misspeaking, Biden claimed that we as a nation are strong thanks to INFLATION.

Josh only tweeted two words about it, but that’s okay… he made his point with “My goodness.”

This man has tapioca pudding for brains.

“Yep corn pop has no idea what he talking about anymore.”

“I’ve struggled with English as a second language… but I swear this guy is too morally, intellectually and physically UNFIT to serve! #FJB“

“#DementedJoe stumbled through his teleprompter speech on the Economy today. You can tell he didn’t write one word of it. #Biden is #Senile and #Incompetent and blames everyone else for his #Failed Policies. Biden has taken a knee before #TheSquad over the #AmericanPeople.”

“OMG, please put him back in the basement!”

“Looks like he himself is not getting enough baby formula to function normally! #FJB #LetsGoBrandon“

“Wtf is this dementia patient saying?”

“Okay, this man on his best days has been nothing but problematic with one asinine policy after another. Now, with obvious diminished faculties, not only is he not very smart, he’s literally dangerous! #DemocratsAreADisaster #ImpeachBiden“

I mean, Biden is right — his strength is inflation, it’s really the only thing he’s actually “built back.”