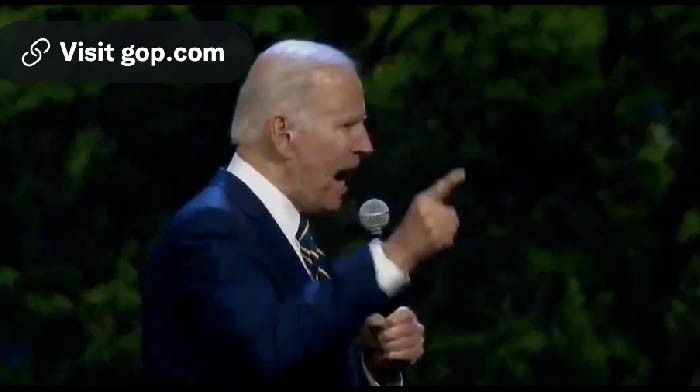 You know when politicians are campaigning and they get really “fake passionate” and start yelling and screaming about how bad things are under the other guy who they’re running against?

They act like they’re really mad and offended and yell and get all worked up? You know what I am referring to, right?

Well, that’s what Joe Biden did today about food shortages, the only problem is that the food shortages are happening under him and his lousy administration, so who the hell is he mad at?

As Joe Biden’s gotten older, and more senile, his not-so-shining personality traits have become much stronger and more visible.

What he could hide before, is now on full display.

Like his temper — Joe has always had a bad temper, he would even tell stories about his temper from when he was a child.

But when Joe had his wits about him, he could control his emotions.

Now that he’s knee-deep in dementia, he can’t, and he has these really creepy outbursts that leave many people feeling really uncomfortable.

Biden starts SCREAMING about food shortages… which are currently happening under his administration pic.twitter.com/jrq48bGb6u

Here’s what people are saying online:

“Anger flashes are due to his senility”

“He should give the current president a piece of his mind.”

“Dems and progressive libs won’t get serious about supply chain issues and inflation until it causes cat food shortages.”

“Biden’s ultra mad and screaming ultra loud because food shortages are happening under his watch, so he’s blaming Ultra MAGA & hoping somebody will be dumb enough to believe him”

“How is this real? What world are we living in?”

“Can someone inform this piece of sh*t what is going on under his watch?”

“This act of theater loses effectiveness when you’re constantly yelling about things but never doing anything to fix the problems.”

“WTF!! The long lines happened and is happening under Biden.. not Trump!!”

“Someone give this man a bowl of pudding and tuck him in, please.”