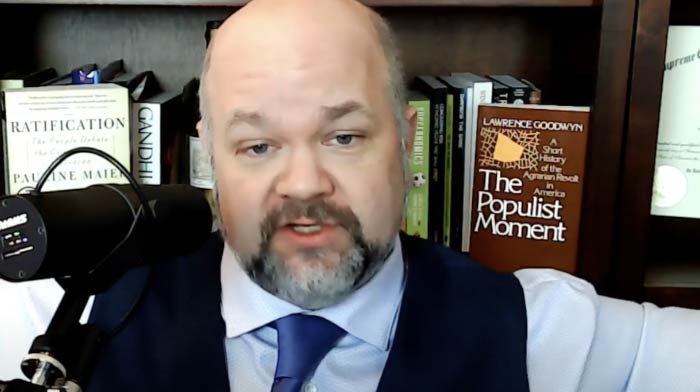 Filmmaker Dinesh D’Souza has put out a new bombshell documentary called “2000 Mules,” and it reveals the massive ballot-harvesting scam that Dems unleashed in 2020 that handed the race over to Joe Biden.

It was basically the same thing they did in California back in 2018 when they ballot-harvested their way to all of those “shocking” last-minute victories.

So, this movie is very important.

It’s a blueprint for what happened, and we can see it all unfold thanks to surveillance videos at each location and the folks at “True The Vote” who literally mapped the mules.

It’s a gift to SEE what actually happened, and prove beyond a doubt that 2020 was NOT the “fairest and most secure” election in American history.

But a lot of us are missing a hugely important detail in all of this… and conservative attorney Robert Barnes is the guy who caught it.

Before we go blaming just the Dems, take a look at this…

Here’s what Robert Barnes said: “#2000MulesMovie is a reminder that @GOPChairwoman failed to do her job. Those surveillance videos were available to be monitored during the election to be on the lookout for ballot traffickers, but the RNC was too busy grifting for Mitch & Mitt.”

#2000MulesMovie is a reminder that @GOPChairwoman failed to do her job. Those surveillance videos were available to be monitored during the election to be on the lookout for ballot traffickers, but the RNC was too busy grifting for Mitch & Mitt.

Where was Ronna McDaniel through all of this?

I’ll tell you where — she was nowhere to be found.

I have said all along that we need to get rid of three key people to be successful. The first is Mitch McConnell, he’s working for the Dems and can’t be Senate leader.

The next is Kevin McCarthy, he’s an establishment stooge and can’t be House Speaker.

And the third is RNC Chairwoman Ronna McDaniel, who is working for both Mitch and Kevin, and doing everything in her power to make sure GOP establishment candidates win out over MAGA candidates.

And she has done NOTHING to address the 2020 election, and now that we know she had access to this footage, why wasn’t it monitored and why hasn’t she spoken out about “2000 Mules”?

I’ll tell you why because she was in on it.