Virginia Governor Glenn Youngkin (R) took a lot of heat this week for not blocking or arresting a protest mob gathered at the Northern Virginia home of Supreme Court Justice Samuel Alito Monday night in violation of state and federal laws. Wednesday, Youngkin sent a letter to the leaders of Fairfax County wehere Alito and two other conservative justices reside calling on the county to establish security perimeters around the justices homes. The letter states Youngkin is willing and able to provide State Police support if requested by Fairfax Police. Youngkin warned of a protest scheduled for Wednesday that he wanted a perimeter set up to block. Justice Clarence Thomas and Justice Amy Coney Barrett also reside in Northern Virginia. 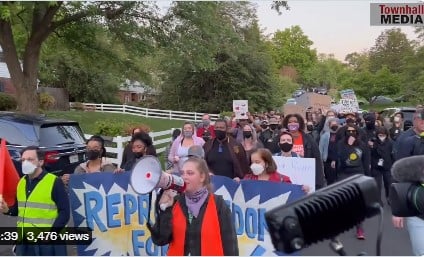 The protest mob on Monday screamed profanities and threatened to shut down the Supreme Court over a draft ruling by Alito that would overturn Roe v. Wade and return abortion matters to the states.

“Fuck Alito, abort the court! Fuck these fascists!” are some chants from the crowd pic.twitter.com/Qq5ksNDhnP

“Your laws ain’t shit, you can’t even find the clit!” chanted the protesters as they marched from Justice Alito’s house.

“Alito is a coward! A stinkin’ little coward!”

“We’re gonna come back and shut shit down!” pic.twitter.com/EV4XLbW36s

The letter was first reported by Breitbart News.

As my Chief of Staff shared with Mr. Hill and reiterated with Chairman McKay, I am writing to respectfully request that the Fairfax County Police Department establish an expanded security perimeter around the homes of the three current Supreme Court Justices who reside in Fairfax County.

This request is based on credible and specific information received about upcoming activities planned at or involving the homes of the Justices in Fairfax County. We believe for the safety of the Justices and their families, their neighbors, and the law enforcement heroes dedicated to preserving peace and order in our communities, that an expanded security perimeter should be established. Establishing a perimeter will ensure both the safety of the Justices, their neighbors and the demonstrators.

The Virginia State Police have offered and stand ready to provide their assistance to Fairfax County Police. We are prepared to provide the manpower and resources necessary to ensure a safe perimeter, which should include limited unauthorized vehicle and pedestrian access, and be established prior to planned events on Wednesday, May 11, 2022.

As you know, the initial law enforcement response lies at the local level, and the Virginia State Police’s involvement will only occur at the request of the local police. In addition to my clear safety concerns, I fundamentally believe such demonstrations and picketing should not be allowed at the Justices’ homes as they are meant to intimidate and influence the Justices, not to mention, scaring their families and small children. Our Secretary of Public Safety and Homeland Security Robert Moiser and the Virginia State Police are prepared to assist and support Fairfax County in this coordinated effort to protect the peace and safety of the Justices, their families, and the neighborhoods in which they live.

Office of the Governor May … by Breitbart News

Jack Posobiec blistered Youngkin on Monday for not protecting Alito.

Youngkin *allowed* an Antifa mob to break Virginia law at Alito’s home today and responded that he is ‘monitoring’ the situation pic.twitter.com/N0IDsyD3oj

Massive L for Youngkin tonight. Can’t even describe it any other way. GOP isn’t ready.

BREAKING: “It’s NOT good enough!”@JackPosobiec calls out Governor Glenn Youngkin for failure to maintain his promise of law and order.pic.twitter.com/cH9wrnmUeJ