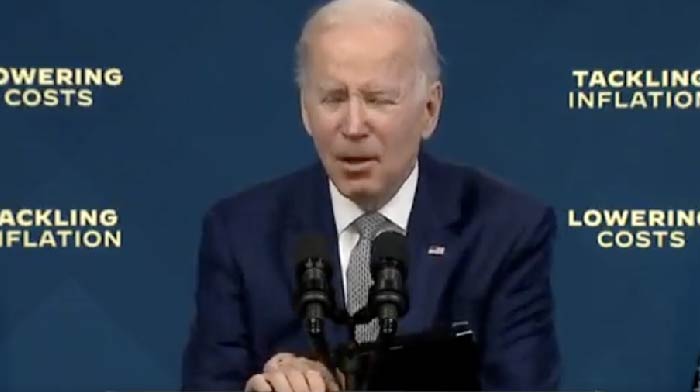 Joe Biden was never known as a smart man.

As a matter of fact, he’s been a joke his entire career.

But one thing he did do successfully was he made a lot of connections. He was the brash, braggart who always said the wrong thing and embarrassed himself, but who knew many people, and kept himself well-connected and that served him well and actually got him into the White House as Obama’s VP.

But the reality is this… Joe Biden has never been an extraordinary thinker or a remarkable man.

Trust me, there’s a reason why Joe Biden seriously thinks crackhead Hunter is the “smartest person he knows.” … It’s because the two of them are cut from the same smarmy mid-wit cloth.

And watching him now, in his twilight years, as the light fades dimmer and dimmer as each day passes, you can really see how mentally gone he is, and truly dumb he always has been. It’s so apparent these days because he can no longer hide behind the fake “childhood stutter” and the so-called “gaffes” the media and other politicians just laughed off as “loveable.”

There’s nothing loveable about a dumb, senile old man with a lot of power who is making people’s lives miserable and is too stupid, arrogant, and too far gone to know it.

And that’s what these 7-seconds are all about… a really dumb man saying really dumb things.

Buck Sexton said it best in his tweet: “Sometimes you have to block out all the noise and chaos in the news cycle, and remember that Joe Biden just isn’t a smart man”

And Biden’s reasoning for inflation, and how his policies are working, is literally the dumbest thing you’ll ever hear.

Sometimes you have to block out all the noise and chaos in the news cycle, and remember that Joe Biden just isn’t a smart man
pic.twitter.com/F8NGjfQnWJ

Just to give you an idea of how arrogant and narcissistic Joe Biden is… this man has a 33% approval in some polls, and clearly, the American people dislike him and his policies, and yet, he still stands there with his frail, concave chest puffed out, refusing to take any responsibility, and calling his policies “successful.”

How tone-deaf can you be?

He’s basically calling the American people “stupid” when he does that.

Reporter: “Why do you believe so many Americans believe your administration is not doing enough to combat inflation?”

Biden: “They’re not focused…I think what I have to do is explain in simple, straightforward language what’s going on.” pic.twitter.com/9S9uw7uwAh

According to ABC News/WAPO poll on 5/1, 68% of Americans disapprove of his handling of inflation.

Biden says those people just aren’t “focused” enough, and he needs to explain it in a “simple/straightforward” language.

Small problem: Biden can’t speak. He sounds like a man who should be in a nursing home, not in the White House.