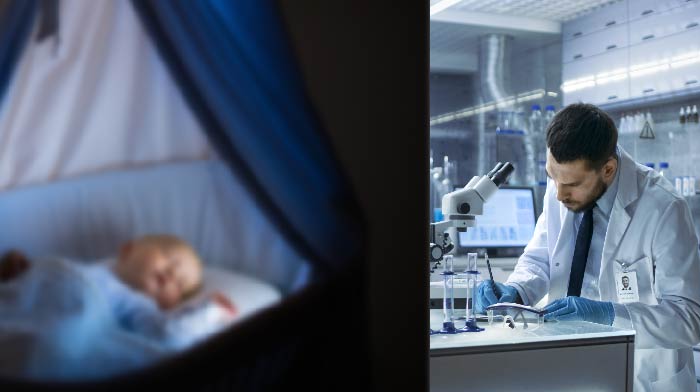 Every parent’s worst nightmare and fear is laying their baby down to sleep, and he or she never wakes up.

When I was a new mom, I was terrified of that happening. Just the word “SIDS” struck the fear of God in me.

I’d stand over my daughter’s crib and watch her breathe, just to make sure she was okay. I’d listen intently to her baby monitor, for sounds of life, and if things got too quiet, I’d be in the room poking and prodding her.

I can’t imagine the horror some parents have had to go through dealing with SIDS, but the good news today is that researchers believe they’ve finally cracked the code and they now know what causes SIDS.

MORE NEWS: Guest at Sandals Resort Thinks He’s Figured Out What Killed 3 Americans In The Rooms Next Door to Him

Daily Wire reported that a sleep expert who lost her son to Sudden Infant Death Syndrome and spent the last 30 years looking for an answer for the inexplicable the disease may have made a breakthrough discovery helping to solve the puzzle.

Her name is Carmel Harrington, and this is what she said: “My research started 29 years ago with the death of my precious son, Damien. Long and challenging work, but now we know that SIDS babies have low levels of the enzyme BChE. First time ever we can work with babies while still alive and prevent SIDS. ”

My research started 29 years ago with the death of my precious son, Damien. Long and challenging work, but now we know that SIDS babies have low levels of the enzyme BChE. First time ever we can work with babies while still alive and prevent SIDS. https://t.co/70miO5lfLA

Now a study she has led has identified the first biochemical marker that could help detect babies more at risk of Sudden Infant Death Syndrome (SIDS) while they still live. “An apparently healthy baby going to sleep and not waking up is every parent’s nightmare and until now there was absolutely no way of knowing which infant would succumb. But that’s not the case anymore,” Harrington asserted.

Researchers led by Harrington identified Butyrylcholinesterase (BChE) as the biochemical marker that could help solve SIDS.

“The study found BChE levels were significantly lower in babies who subsequently died of SIDS compared to living controls and other infant deaths,” Sydney Children’s Hospital Network reported, adding, “BChE plays a major role in the brain’s arousal pathway and researchers believe its deficiency likely indicates an arousal deficit, which reduces an infant’s ability to wake or respond to the external environment, causing vulnerability to SIDS.”

Harrington stated, “Babies have a very powerful mechanism to let us know when they are not happy. Usually, if a baby is confronted with a life-threatening situation, such as difficulty breathing during sleep because they are on their tummies, they will arouse and cry out. What this research shows is that some babies don’t have this same robust arousal response.”

“This has long been thought to be the case, but up to now we didn’t know what was causing the lack of arousal,” she commented. “Now that we know that BChE is involved we can begin to change the outcome for these babies and make SIDS a thing of the past.”

“This discovery has opened up the possibility for intervention and finally gives answers to parents who have lost their children so tragically. These families can now live with the knowledge that this was not their fault,” she concluded.

Wow, this is a miracle breakthrough and can save so many lives.

God Bless this woman for fighting so hard to save other babies after she lost her son in this tragic way.