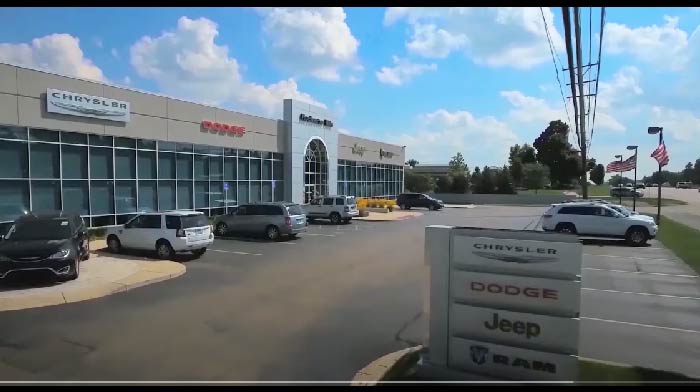 This is the most bizarre lawsuit story I’ve heard of in a long time.

A Jeep owner is in legal hot water after his car killed a man during an oil change.

The owner of the car was not there and had nothing to do with the tragic mistake that killed a mechanic, but he’s still being held responsible.

This has left many people saying, “WTF???”

The New York Post reported that a Michigan man who left his car at a dealership for an oil change and tire rotation is being sued after his vehicle was involved in the death of one of the dealership’s employees.

Sergio Enrique Diaz-Navarro took his red 2019 Wrangler to a Chrysler Jeep Dodge dealership on March 13, 2020, and 19-year-old lube technician Daniel Thompson worked on the car. After the service was complete, the vehicle “lurched forward” as the young employee attempted to operate it, crushing 42-year-old mechanic Jeffrey Hawkins against a cabinet, court records show.

Thompson had lowered the Jeep from the vehicle lift, and then tried to start the car and let it idle to ensure there were no oil leaks around the filter, according to court records.

Hawkins was taken to the hospital, where he succumbed to his injuries, according to The Kansas City Star.

Diaz-Navarro and Thompson were both sued in a Michigan circuit court in March 2021.

Attorney David Femminineo, who is representing Hawkins’ estate, told FOX 2 that Thompson did not know how to drive the vehicle’s manual transmission and did not have a license. The attorney also said the dealership cannot be sued because of a legal standard preventing an employee from suing their boss for negligence, which, in this case, would be the hiring of someone who should not have been driving.

Because the incident happened at work and involved two employees, the boss cannot be sued, FOX 2 notes.

Diaz-Navarro’s attorney told FOX 2 he plans to fight the case in a trial later this month.

“When you hand your car over to anybody including the valet or the person at the service desk at your local dealership, you better be able to trust that person,” the attorney said.

Femminineo told McClatchy News that the car owner is responsible for Hawkins’ death in the same way that someone who lent another person their vehicle would be liable for any injuries caused by the driver. He said a person who lends their car is liable for negligent acts because they gave the other person permission to use their vehicle.

According to a summary filed in court on March 1, the court has ordered the Rochester Hills Chrysler Jeep Dodge dealership, where the incident occurred, to indemnify Diaz-Navarro if he is found liable of negligence.

“So in reality, the owner is going to be held responsible, but the dealership’s insurance company is paying,” Femminineo told McClatchy News. He said he hopes a verdict in excess of $15 million is awarded.

I don’t understand how a jury anywhere would hold a car owner responsible for anything when he wasn’t even near his car when the tragic accident happened.