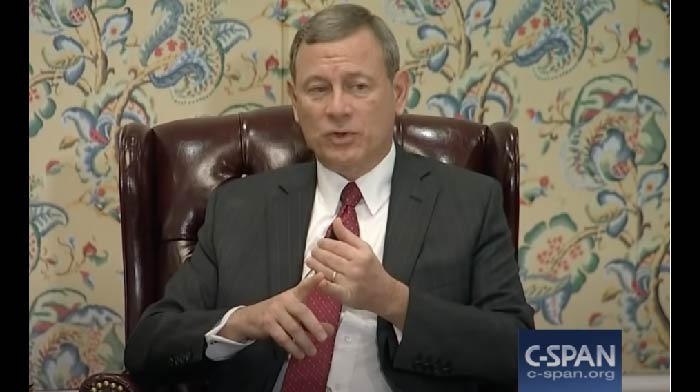 Many people believe it’s a clerk for one of the liberal justices.

Ted Cruz believes a clerk for Sotomayor is to blame, although he says he doesn’t have proof.

It’s just a hunch… and at this point, that’s all we have are “hunches.”

But a clerk for a left-wing justice just seems too easy and a little too “on the nose” doesn’t it?

That’s a package wrapped up too nicely, and with a perfectly predictable bow — so perfect that it just doesn’t feel “right.”

So, I went snooping around the internet today to see what folks were saying about the leak, and I found something from someone who I respect a great deal, and I thought I would share his theory with you.

He writes under the name “Sundance” and he owns the popular political blog called “The Conservative Treehouse.”

Now, Sundance doesn’t say a lot about his “theory,” as a matter of fact, he says nothing — but he names the guy, and I gotta tell you, it feels “right.”

Sundance shared his thoughts on a story from The Hill about the fallout over Chief Justice Robert’s so-called “leadership,” or lack thereof… and speaking of Roberts…

Sundance believes Justice Roberts is the leaker, and wouldn’t that just make so much sense?

Many people believe that the left has “something” on Justice Roberts.

He’s certainly known for siding with the left when they need it most, so would it be so out of his character to help the left by leaking the document?

Nobody would ever trace it back to him, and endless rumors about left-wing clerks would circle DC and beyond for decades.

“Yeah. Roberts is not on our side.”

“It wouldn’t surprise me. What do they have on this guy?”

“I heard they have something on him about an irregular type of adoption.”

“I would say this was coordinated by Mitch. The last thing the establishments wants is a MAGA congress”

“This is an interesting theory, I know a lot of people are thinking this way”

“that was my first thought days ago that either Roberts or Sotomayor was the leaker.”

“Wonder though if it was one or more who were involved in the document operation.”

“Roberts is a politician hiding in a black robe.”

“Having seen the public face of Merrick Garland without his robes on has destroyed my previous misconceptions that a man could put aside politics and agendas for the court.”

“If he is the leaker, they’ll will impeach him and replace him with another radical Ketanji pro-pedo type. Would he really sacrifice himself like that, or will the FBI & Schiff & company set him up to take the fall?”

I don’t think they’ll ever name Roberts as the leaker, he could rat them out on too many things.
I believe they did this to try to jump-start midterms and get the base “engaged” again.

But it’s an interesting theory. What do you think about it?
Social Media
Home