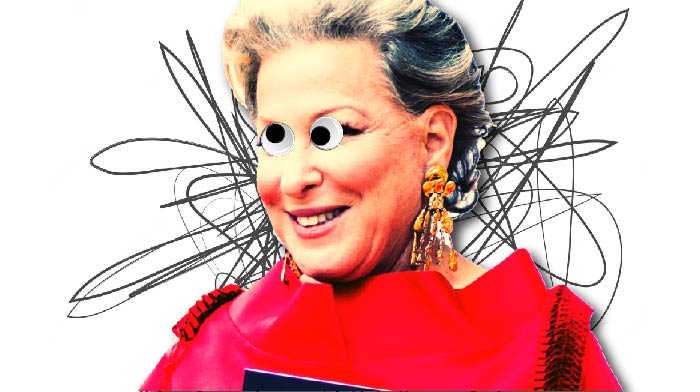 Well, I regret to inform you that Crazy Grandma Bette is back at it again.

Every month, you can count on Crazy Grandma Bette to jump into whatever “social justice” outrage is being screamed about by the left, and get relentlessly mocked online for it.

And just like clockwork, as the Roe v Wade debate heats up Bette is right there, ready to make a fool of herself.

I am convinced that family members of her and Cher should jump-start an intervention and get these two crazy old bats off the internet because they really don’t understand what’s happening in the world around them.

But in the meantime, Bette will keep jumping into the fray and getting dragged around the internet like a beat-up old rag doll.

Regarding the Roe v Wade stuff, here’s what Bette posted — another Handmaid’s Tale meme — which is ironic since it’s the left who’s been pushing dystopian lockdowns and forcing people to get injected with a creepy vaccine against their will, and the right who’s been fighting against it.

Here’s what people online had to say to Bette and her goofy meme:

“I think Bette Middling has a few screws loose”

“Leave it to Bette to promote violence”

“Someone needs to come get meemaw and tuck her into bed”

“The actress in Handmaid’s Tale belongs to the cult of Scientology, ruled by men LOL”

“Daily reminder to the caregivers to get Mee Maw her pudding cup and slippers.”

“Promoting violence! Kill the unborn hurt those that protect the unborn? Did I summarize it correctly?”

“Does Better have a family who can change her passwords?”

“None of these characters are real, Bette. Do you realize that, or no?”

“For being such “strong women” they sure cry alot.”

“I’m beginning to believe that Leftists are in fact so brainwashed that they believe this is what Republicans want.”

“I love that @BetteMidler inserts intention then implies violence instead of oh I don’t know talking with people. Planned Parenthood and abortion exist in the USA because of the Eugenics movement. It was a way to kill off the black population. Don’t be like Bette try discourse.”

“Bette Midler’s like 100 years old, she could break a hip just getting off the toilet, she’s not doing anything, and neither are the rest of you losers”

It’s kinda sad when you think about it — this is how Bette is spending her golden years — being mocked and humiliated on Twitter, all because she still has a raging case of Stage 5 TDS.

Liberalism really is a mental disorder.