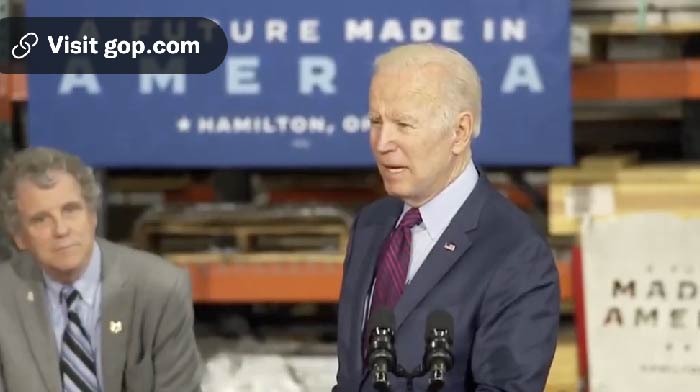 Every day Joe Biden does something new that totally floors me.

Just when I think he can’t possibly do anything more outrageous than the last outrageous thing he did, he goes and proves me wrong.

And it also amazes me that his Handlers don’t have better control of him. I guess the rumors about him being a stubborn, cantankerous, mean old bird are right.

I have read “insider scoops” that Joe is a handful and does whatever he wants and won’t listen to his Handlers much of the time.

And I am sure after today’s new disaster, most of those Handlers will guzzle vodka from the bottle.

So, what did Senile Joe do this time?

Well, while he was on a speaking tour in Ohio, pretending he’s not a lifelong globalist who’s destroyed the middle-class when he got to talkin’ about the good ol’ days in DC when there were “real segregationists” and how at least with those guys, they’d end up eating lunch together.

BIDEN: “Even back in the old days when we had real segregationists — like Eastland & Thurmond and all those guys — at least we’d end up eating lunch together” pic.twitter.com/k6YPBmytDG

I would imagine this is Joe’s way of saying that MAGA ULTRA — the most “extreme political group in the universe,” is less approachable and friendly than old-time DC racists, who happened to be Democrats…

“Holy crap, does this man ever stop to think what he might say is racist?!”

“Call me crazy, but I wouldn’t think a Dem would want to wax nostalgic about eating lunch with literal segregationists.”

“The good old days for Joe.”

“What a maroon. Those were Democrats. Just like you, Joe.”

“Partying with segregationist maybe don’t say that out loud.”

“Biden has done it. He has united all of the south behind him with one comment.”

This guy just can’t stop digging himself a hole, can he?