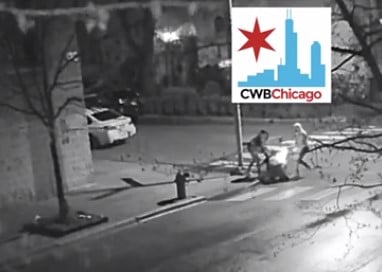 A Chicago man was shot three times in Lincoln Park after he refused to hand over his phone password. The video at CWBChicago shows the robbers waiting to ambush the man as he walks down a street at night in Lightfoot’s Chicago.

An armed robber ambushed a man during a hold-up in Lincoln Park early Friday — then shot the victim twice.

And, after ordering him to give up his phone password, he shot the man again in the head as the victim writhed in pain on the street. Chicago police said the victim is in his 20s and was critically wounded.

It happened at the corner of Wayne and Webster avenues around 3:05 a.m.

And it was all caught on gut-wrenching video with sound.

The hold-up is part of a two-night wave of robberies in Lakeview and Lincoln Park that left at least eight victims in its wake.

I parked here less than 12 hours before this happened. I’m regularly in this neighborhood. I’ve never felt as unsafe as I do in ⁦@chicagosmayor⁩
Chicago
Video: Armed robber shoots man 3x in Lincoln Park after demanding phone password – CWB Chicago https://t.co/vlUYucR3hm