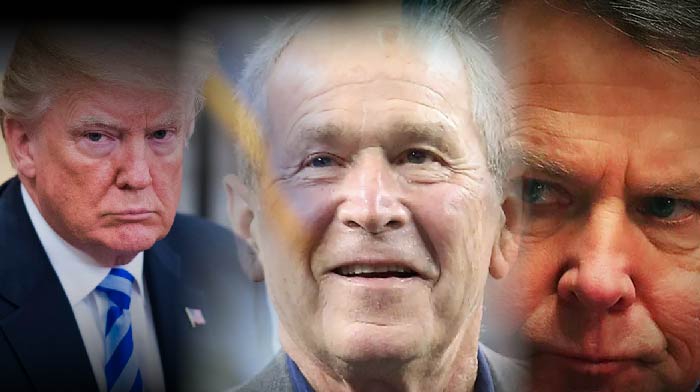 You may have heard today that George W. Bush is endorsing Brian Kemp.

But there is a lot more to it… A LOT, and it’s important stuff that you need to know and understand.

And thankfully, the well-respected political blogger “Sundance” from The Conservative Treehouse is all over this and breaks down everything you need to know in a series of tweets.

So, today, Bush threw his hat in the ring for RINO traitor Brian Kemp, who’s running for Georgia governor — it’s also fair to note that Pence’s guy is also working for Kemp. It’s a real “establishment” free-for-all over there.

Meanwhile, President Trump, who can’t stand Kemp, for obvious reasons, endorsed his GOP primary challenger David Perdue, even though Perdue is a long-shot, even with Trump’s golden endorsement.

So, what’s with the Bush endorsement? Well, Sundance lays it all out and perfectly explains exactly what’s going on with that endorsement:

1) It’s a smart play. Dubya ain’t stupid (a-hole yes, but not politically stupid). Bush knows democrats are going to vote for Kemp in primary. He knows to a certainty. This endorsement lets Dubya look like he defeats Trump when Kemp wins the primary. Fuels media etc. etc.

There are no registered Dems or Repubs in GA. You walk up to the polling place on primary day and they ask you whether you’d like to vote in the Dem primary or the Repub primary.

2) The GOPe Club get the scalp of a Trump-endorsed candidate losing in the primary. The Club old guard get to push the 2022 ‘see MAGA are extremists’ narrative, which, not accidentally, aligns with McConnell’s narrative. It’s all club insider stuff.

3) The key point is that the Kemp primary victory is a predetermined outcome. Bush isn’t going out on a limb, he knows this part of the performance is all club pantomime, theater, stuff for media to use as ammo against Trumpism.

4) There’s a deep internecine hatred here. The Old Guard, the real owners of the Club, hate, despise, and abhor Donald Trump -and his supporters- the same way they did the Tea Party before. Any move that hurts MAGA is a win for the Club. Any move.

5) I would hazard a guess Trump realized this set-up a week or so ago, hence the statement about GA and McConnell that caught a lot of people off guard. Don’t be naive as to not see Perdue as a Club player in this. That’s the way these Machiavellian types work. It’s club stuff

1) It’s a smart play. Dubya ain’t stupid (a-hole yes, but not politically stupid). Bush knows democrats are going to vote for Kemp in primary. He knows to a certainty.

Now, had they put an America First candidate in that GA slot, we likely would have had a better shot, but as Sundance points out, it’s a “club.”

There’s a “club” like that in Utah and other places, too.

Many people believe Perdue was a candidate who jumped into the race to thwart any America First candidate from “stealing” it from Kemp… again, “club” stuff.

We will know for certain as we watch Perdue’s campaign unfold, and how hard he plans on hitting Kemp on crimes, especially carjackings, which are out of control.

But brace yourself, because Georgia could be a thorn in our side… again.