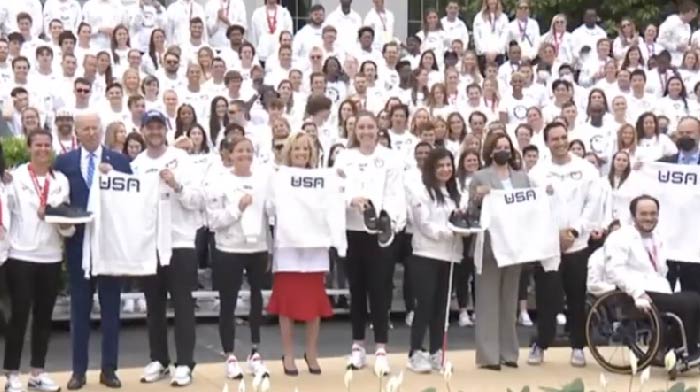 Joe Biden has always been an idiot.. his entire career he’s been a joke… the type of guy who walks around with his foot inserted in his mouth because he has no filter and thinks he’s the “funny guy” that everyone “gets.”

Biden has spent a lot of time cultivating this “Middle-Class Joe” persona, where he’s just one of us, and everyone else in DC is an out-of-touch rich, elitist.

Biden is a rich elitist, and he’s always used his power and position to enrich himself and his family.

But he likes to play up the “Middle-Class Joe” persona, and part of that includes these off-color jokes and weird things he blurts out; as if that’s how normal people talk – like uncouth, bumbling idiots.

MORE NEWS: [VIDEO] Joe Biden Has No Idea Which Side Of The Russia/Ukraine War He’s Funding

He’s done this his entire career, because he thinks it’s “endearing” and sets him aside from other politicians, and maybe back in the 90s that was true, but it’s not anymore and hasn’t been for a really long time.

So, when Biden blurts out his weird comments now, it’s seen as awkward, and inappropriate, and many people rightfully question his mental faculties, because normal people don’t behave like this.

And the recent incident at the White House is a perfect example of this.

While Biden was honoring Paralympic athletes, he stood for a group photo, and just as the pic was being taken, Biden yelled out “DON’T JUMP!”

A very thoughtless thing to say to athletes who are sitting in wheelchairs.

Listen to the uncomfortable, groaning laughter from the crowd.

Biden is such an embarrassment. Here’s what people online had to say:

“FREAKING DISGUSTING. APPALLING in EVERY SENSE of the word.”

“Biden is a walking gaffe machine and the gift that just keeps on giving.”

“Obama poked fun at Special Olympians. It’s a thing with these elite dirtbags .”

“Don’t jump? and not one of you Biden voters are yelling how inappropriate that was?”

“This is NOT normal behavior. Telling someone in a wheelchair not to jump? #Article25 now.”

“Wow just wow! And 80 + million Americans voted for this guy?”

“Lunatic always gets a free pass. If DJT said this he would’ve been impeached for a 3rd time.”

“This is just so awful. Why do we have to keep being embarrassed like this as a country?”

Joe is the embarrassing gift that keeps on giving… and every day it gets worse and worse.