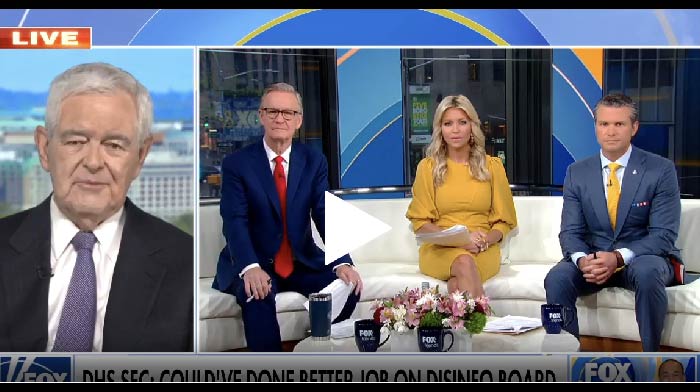 Like most sane people in America, Newt Gingrich has a serious issue with Biden’s “Ministry of Truth.”

What was started by President Trump’s admin to use at the border, has been morphed into some “dystopian North Korea” monitoring system, led by a “Russia Hoax” nutjob, who claimed Trump supporters would show up at the polls in 2020 “armed.”

Well, Newt has some very bad news for Biden and Mayorkas… looks like the “Ministry of Truth” is completely and totally unconstitutional, and Newt says Mayorkas should be impeached immediately.

MORE NEWS: Conservative Pundit Names Exact Day Dems Will Dump Biden and The PERSON Who Will Tell Him It’s Over

Breitbart reported that on Monday, former House Speaker Newt Gingrich reacted to the Department of Homeland Security’s creation of the “Disinformation Governance Board” that was created to fight what it deemed “misinformation.”

Gingrich argued the disinformation board was “a total violation of the American Constitution.”

“[F]irst of all, this is a good example of big government socialism at work,” Gingrich declared. “This is a censorship board. Now, the First Amendment of the Constitution says you can’t make any law that affects free speech. So, Mayorkas — who I think should be impeached immediately, and the board should be defunded immediately — Mayorkas is essentially explaining that they are going to break the Constitution, exercise censorship, and that’s what it is — censorship, and we are supposed to trust their appointees who are all left-wingers to be fair and neutral. This is nonsense. I mean, these people are crazy. And I think we need to understand what they’re trying to do is a total violation of the American Constitution.”

Gingrich pointed out that Mayorkas was not doing his job to secure the U.S.-Mexico border.

“So, his real job to protect the American people is not being done, while his new job to censor you and me is being done,” he concluded.

Look, Joe Biden was never a “moderate.” This idea that Joe was some “middle-of-the-road” Dem before 202o is hogwash. Even at the beginning of his career, Biden was talking about the “New World Order” and growing globalism.

But with that said, he’s moved so far to the left, that even HE is unrecognizable at this point.

The radicals in the Dem Party need to be flushed out and cast aside or we won’t have a country left.