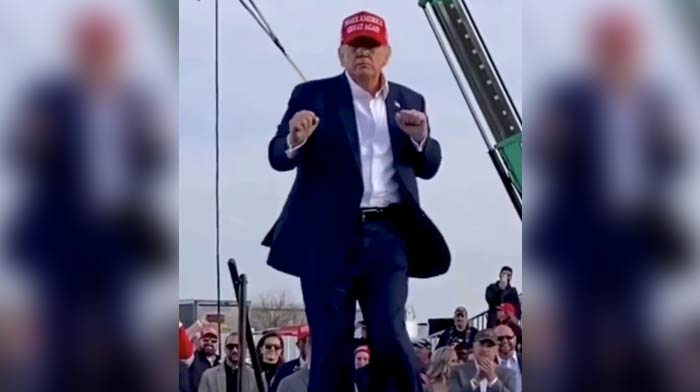 President Trump was recently in Greenwood, Nebraska for yet another barn-burner of a rally.

Trump is out and about stumping for America First midterm candidates, so when we take back the House and Senate in 2022, we can do it with patriots, not RINO traitors.

“We are going to elect Charles W. Herbster, a good man, a very good man, he’s going to be elected as your governor,” said Former President Donald Trump.

The rally, held at the I-80 Speedway, featured a guest appearance from former President Donald Trump, who has endorsed Herbster in the governor’s race.

“Charles is a fine man and he is innocent of these despicable charges, by the way Charles welcome to politics,” Trump said. “I have to defend my friends, I have to defend people that are good. These are malicious charges to derail him long enough that the election can go by before the proper defense can be put forward.”

As you know, Trump is known for his “dance moves,” but I gotta say, they’re getting even better.

I don’t know what it is, but Trump just looks so good. He looks trim, his coloring is vibrant and glowy, and I love this look he’s got, with the open suit, unbuttoned collar, and no tie, and the MAGA hat, gotta have the red hat!

He looks so stylish and handsome, and he’s even sporting some very slick new dance moves.

Dan Scavino shared this great clip on his Twitter page.

People get a kick out of seeing President Trump having a good time:

“These are so much fun to watch!”

“Look at this man. They stole an election from him and he’s still out there having fun. This guy is amazing”

“We need him back at the helm to right this ship wreck!!”

“This man knows something we don’t know…Yet”

“The greatest President in American history and the greatest moves too”

People love to see President Trump out and about.

They also love seeing him back on social media. He’s been posting on Truth Social, and his supporters are really enjoying it.