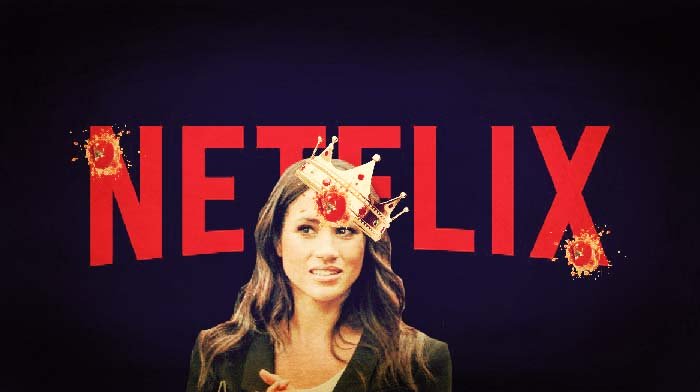 Many are saying that Netflix is the “Titanic” of streaming services — and not as in “BIG,” but as in “sinking.”

The massive streaming giant, which many believed was far too big to fall, is now crashing and burning.

Many attribute the drastic loss of subscribers and the stock crash to a lot of competition in the streaming marketplace now.

Also, Netflix doesn’t have good security, so you can have many people in different homes sharing the same account.

But, one of the biggest reasons that people are leaving Netflix is because the content sucks.

It’s gone down the hill after the woke Obamas hopped on board… things got very progressive and political and it turned off many people.

As a matter of fact, things are so bad over at Netflix, that they just gave Meghan Markle the royal boot-in-the-butt, and sent her and her “feminist” animated series packing.

MORE NEWS: [VIDEO] Biden Laughs His Butt Off Over Jokes About Inflation and Soaring Gas Prices

Deadline reported that even Netflix’s in-house members of the Royal Family are not immune to a wave of cutbacks going on as the streamer recalibrates after a precipitous stock drop incurred after a drop in subscribers. Netflix has quietly dropped Pearl, the working title of an animated series that was created by Meghan Markle through Archewell Productions, the shingle the Duchess of Sussex and Prince Harry set up at Netflix in fall of 2020 to create scripted series, docuseries, documentaries, features and children’s programming. Pearl was to be Archewell’s first animated series.

Word in town is that even before recent events, Netflix had been telling producers to take some development projects elsewhere, after those producers had been given indication they were priorities. Clearly, Netflix’s inordinately high content spend is being reevaluated. Many have felt that the Netflix “movie a week” mantra was an overreach, for instance. While Netflix felt pressure to generate originals to bolster its library as studios cut back on licensing titles as they started their own rival streaming services, there is reason that generating that much content has never been done before. It is just unreasonable to expect its execs to manage that many projects, and have enough of them turn out to be memorable. Expect the Netflix model to evolve; quality control and selectivity is actually a virtue for a mature streaming service.

I know this might sound crazy to Netflix, but most people decide to sit down and watch a show or a series to escape from the everyday politics and social justice nonsense that we’re subjected to, non-stop from the insufferable left. Normal people don’t want to be hit over the head with that garbage while watching shows.

I can’t tell you how many Netflix shows I have turned off because of stupid “woke crap” and this cringey “girl power” nonsense.

If you have to work THIS HARD to convince me that women are the “real” superheroes, maybe they’re not.

I hardly ever watch Netflix, and the ONLY reason I have not canceled it yet is because there are a few documentaries I want to watch first.

After that, it’s bye-bye woke weirdos.